Simple devices called sand dams are being used in semi-arid regions of Kenya to provide year-around water for irrigation and domestic use.  Water is captured during the rainy season for use during the dry season, which lasts for months. The unique feature of  storing water via sand dams is that 60% of what is held is sand and only 40% is water.

In semi-arid regions of Kenya a period of heavy rains, which usually comes in December,  is followed by months of drought.  Kenyans have developed a device called the sand dam to get through the long dry season.

Sand dams are built on seasonal rivers, like the Kaiti in the picture below, to hold water for months after the water in the river itself has disappeared.

The sand dams trap water in the river’s sandy riverbed.  The dam holds sand as well as water.  In fact, a well constructed sand dam usually holds a reservoir of about 60% sand and 40% water.

To make a dam,  a high concrete barrier is constructed across a seasonal river. When it rains, the water carries sand downstream, depositing it up to the level of the barrier. When the rains finish, water remains trapped in the piled-up sand for up to a kilometer upstream of the dam. 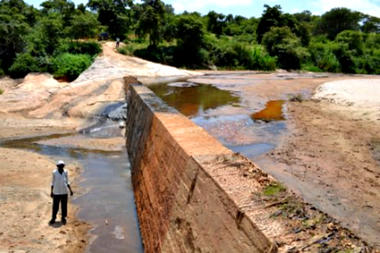 A Community Sand Dam on the Kaiti River in Eastern Kenya

In terms of volume,  an average sand dam in a relatively wide stream such as the Kaiti River can hold up to 5,000 cubic meters of water, equivalent to 5 million liters (1.3 million gallons). To boost the volume of water stored, several sand dams can be built along one river.In one region where 1,500 sand dams have already been built, it is estimated that the dams can retain as much as 2 billion gallons of water.

To use the water, community members scoop out sand from the river bed to expose it. It can then be pumped out for irrigation or other uses.

Over 3,000 households are now using water from the dams to grow vegetables, tomatoes, drought-resistant legumes, fruit trees such as grafted mangoes and oranges, and other crops.

The sand dams now provide water in places where residents formerly had to walk miles in hope of finding water in a shallow well during the dry season.

The sand dam technology is believed to be indigenous to Kenya, though it is now being used in other areas such as Zimbabwe, Brazil, and Thailand.  The Kenya project, however, is the first time dams have been built in such large numbers (literally thousands) and as permanent structures.

Building of the dams has been a joint project of NGOs and locals.  The NGO donates cement to eligible groups and offers technical assistance. The self-help group members then have to collect construction materials such as stones, which are locally available, and offer unskilled manual labor during construction.

Typically, 250 people can build a sand dam in a single day.