America’s Aquifers Are Threatened by Over-pumping and Pollution

Twenty percent of US water for drinking, crop irrigation and everything else comes from underground water.  We seldom think of aquifers as being “endangered,” but that is actually the case, as we continue to overuse their water and pollute them with chemicals.

The great Ogallala Aquifer, beneath the Great Plains, supplies 27% of the nation’s farmland with irrigation water.  It has undergone decades of depletion through overpumping.

The Central Valley aquifers of California are also being rapidly depleted to supply the nation’s fruit and vegetable demand.

The mighty aquifers that supply New York and New Jersey are being drained and polluted.

Among the suggested aquifer-friendly actions we can take are “curbing fertilizer and pesticide use, responsibly disposing of pharmaceuticals and hazardous waste rather than flushing them down the drain, maintaining septic systems to reduce nitrogen pollution, and protecting open space to promote rainwater infiltration and aquifer recharge.” 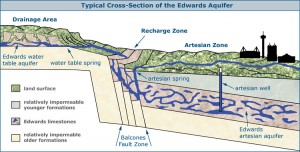 Edwards Aquifer That Lies Beneath a Large Portion of Central Texas

Full report on aquifers and an excellent video.