Gazette’s Nutshell View:  When Chinese pigs die of disease, farmers routinely toss their bodies into the nearest river.  The Huangpu, Shanghai’s drinking water source,  gets more than its share.

More than 2,800 pig carcasses were discovered in the Huangpu River, which feeds Shanghai taps. Rivers are apparently a popular repository for swine that die of disease.

Here’s a riddle for you: When is the discovery of 2,813 dead and rotting pigs in a major city’s water source not a public health problem?

Answer: When the discovery is made in China.

The Shanghai water bureau, which oversees the water consumed in China’s largest city, was insisting on Monday that tap water derived from the Huangpu River met national standards despite the presence of the decomposing pigs.

All I can say is that I am glad I live in Beijing, not Shanghai. 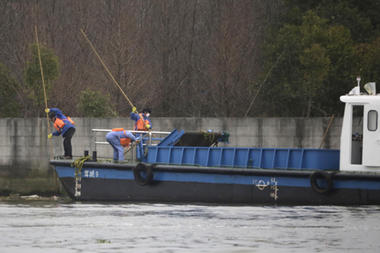 Truly disgusting photographs of bloated porcine carcasses on a riverbank have appeared in many Chinese papers and websites, drawing attention to what seems – believe it or not – to be a relatively common occurrence.

When pigs die of disease, farmers who cannot be bothered to bury the animals just toss them into the nearest river.

Local residents of one pig-rearing village upstream from Shanghai told the national broadcaster China Central Television on Sunday that disposing of dead pigs in the river was a common practice. “After the pigs died of illness, [they] just dumped them in the river … constantly. Every day,” one villager said.

“They are everywhere and they smell very bad,” the villager added.

Thousands of pigs in the Shanghai area have succumbed to epidemic disease in recent months, according to the Jiaxing Daily, a government-run paper in a hog-raising region southwest of Shanghai.

Last week the paper reported that more than 18,000 pigs had died since the beginning of the year in Zhulin, a village in the Jiaxing district. It was not immediately clear how many of them had been legally disposed of and how many had been thrown into the river.

But in a report last week, the paper quoted one pig farmer as saying that “when things are busy,” he and his fellow farmers do not bother to call the local veterinary services to take the corpses away and just “throw them away where we can.” In the summer, he added, the smell of rotting meat is sometimes so strong that villagers cannot open their windows.

More worryingly, the paper said, many readers had called the editorial desk’s hotline to report pig carcasses abandoned by the roadside or in water channels that had mysteriously lost their hind legs overnight.

“What if they were cooked in a restaurant?” the newspaper article wondered.