Sending California Water to Saudia Arabia in the Form of Alfalfa 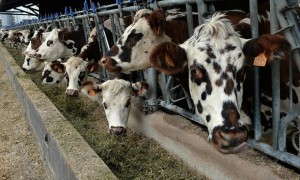 If you are the largest dairy producer in Saudi Arabia and you are running out of water to grow cattle feed, there’s only one thing to do if you want to stay in business: go shopping.

Which is exactly what dairy giant Almarai has done, undertaking a global search for land and water to grow alfalfa to feed its dairy cows. The search brought Almarai to a most surprising place: California, which is suffering its worst drought in recorded history.

Earlier this year, the company announced that it had paid $31.8m for 1,790 acres of land near Blythe, in the southeastern corner of California, for the sole purpose of growing alfalfa. Known as lucerne in some parts of the world, alfalfa is a member of the pea family, growing up to 1 meter high with small purple flowers and leaves that resemble clover. Almarai will grow the crop using water diverted from the Colorado River, then ship it back to Saudi Arabia to feed Almarai’s estimated 1m dairy cows, helping to ensure it remains the number one dairy producer in a nation of 30 million people.

But for Adam Keats, a senior attorney at the advocacy group Center for Food Safety, Almarai’s land purchase highlights everything that’s wrong with globalization. Not only does it result in exporting California water in the form of alfalfa, he said, but it also creates enormous carbon emissions to transport heavy, bulky animal feed to the other side of the world.

“Water is an essential and core common good,” Keatsa said. “But they have figured out this proxy method of owning our shared water resources. It’s a fiction to believe that globalization is this unqualified good thing for the world.”

Almarai’s methods have also prompted concerns in the Blythe area, but for different reasons. Farmers there don’t particularly care who owns the land or where the alfalfa gets consumed. They merely want the water to remain devoted to farming, where it can support the local economy, and not sold off to Los Angeles to ease urban water shortages.

“They’re not doing anything else but farming at this point. But I still watch,” says Ned Hyduke, general manager of the Palo Verde Irrigation District, which delivers water to farms in the region. “They are our customers and we’re going to take care of them, but we want to make sure they follow the rules.”

For decades, an agricultural boom in Saudi Arabia relied entirely on groundwater. But rapid growth depleted those aquifers, causing many farms to collapse and forcing the nation to whiplash from being a net exporter of many commodities to a net importer. Alfalfa, a thirsty crop that is among the most nutritious livestock feeds, is just one case in point.

Almarai is the largest player in the Saudi Arabian dairy business. Its founder and largest shareholder is Saudi Prince Sultan bin Mohammed bin Saud Al Kabeer. The company holds the top position in sales of cheese, milk and yogurt, notching record profits of $1.4bn in 2015, up 15% from the prior year. It has held that position, despite water shortages, by importing alfalfa and buying farmland in other countries.

With such deep pockets, the company is able to buy farmland anywhere. It made a smart choice in the Blythe area: the desert region has abundant sunshine and ample water rights in the Colorado River, which have remained secure despite California’s four-year drought. This combination is partly why California’s soil can produce more alfalfa per acre than any state except one. Only Arizona gets a higher yield – and Almarai has bought farmland there too.

But its latest purchase in California is simply “insane”, according to Christopher Thornburg, an economics professor at the University of California, Riverside. California officials, he says, have effectively become spectators to a game in which the state’s most precious resource is exported across the globe in the form of alfalfa.

“We are exporting water in the middle of the drought at shockingly low prices,” Thornburg said. “This is a travesty. There’s no other word for it. This is a complete and utter travesty.”

Almarai officials did not respond to requests for comment.

Thornburg is not necessarily upset that California is exporting alfalfa. That’s been going on for a long time, and Saudi Arabia is a small player. California exported one-fourth of its total alfalfa production of roughly 2m tons in 2015. China took about one-third of that, or around 700,000 tons, and Japan was a close second. Saudi Arabia bought only 5,000 tons.

What irritates Thornburg is that the state’s most abundant water supply is being used to grow a thirsty and low-value crop like alfalfa. What California needs, he said, is a real water market that would direct the resource to its highest and best use, whether that’s a more valuable crop, like protein-rich almonds, or to meet the urban needs of homes and businesses.

All of the state’s water is considered a public resource, but it is controlled under an outmoded system known as “first in time, first in right”, which took hold when the state was settled starting in the late 1850s. Although the water is owned by all Californians as a public resource, whoever claimed that water first has top priority to use it, and there are virtually no limits on how they use it. Water claims often come with the land, so water rights are typically attached to property sales. Rights holders may sell their water, usually in the form of temporary transfers, although there is no permanent market in place to simplify the process.
How one man plans to make billions selling Mojave desert water

Water to grow alfalfa in the Blythe area costs farmers about $70 an acre-foot, Thornburg said. But that same water could fetch $1,000 per acre-foot if piped to homes in Los Angeles, 200 miles away, where water shortages caused by the drought have prompted rationing.

“You’ve got to assign a price to water,” he said. “You can’t just give it someone and tell them to do whatever they want with it. You’ve got to allocate water to its best use.”

Because that water isn’t freely available on an open market, agencies like the Metropolitan Water District of Southern California are forced to do what Almarai has done: buy land with good water rights. The district is the largest urban water provider in the US, serving the vast population stretching from Los Angeles to San Diego. And in July, Metropolitan became the largest property owner in the Palo Verde Irrigation District when it bought 12,000 acres of farmland near Blythe for $256m.

This rattled farmers in the area even more than Almarai’s purchase. They expect Metropolitan merely wants to fallow the land and export its Colorado River water via pipeline to serve urban homes and businesses. Almarai’s land purchase, conversely, could lock up some Colorado River water in alfalfa production. This would prevent it from being available for some other purpose to help California manage its present and future water shortages.

“It’s a huge problem,” Keats said. “We need to be taking a more proactive stance on how we want anybody to be using our shared resources. Those uses have to be subservient to the public good.”