After 15 Years of Drilling,  Russians Have Brought a 2 Meter Slab of Ancient Ice to the Surface

As we previously reported, Russian scientists have been drilling under the most difficult of conditions in an effort to 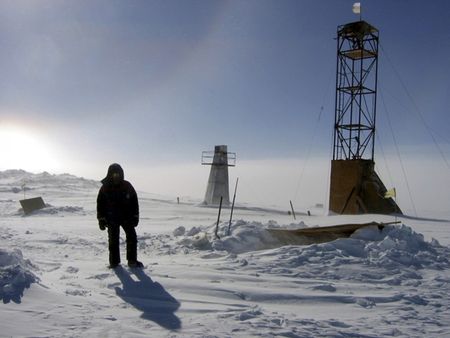 reach a body of water called Lake Vostok that has been isolated from the rest of the planet for at least 20 million years. The lake lies 2.5 miles beneath the surface of Antarctica.  It is 160 miles long and 30 miles across.

Drilling through the 2.5 miles to hit the lake has been done under the most brutal of conditions in an area where temperatures have been recorded down to -129F.  Drilling was possible only during the short summer season, and has stretched out over 15 years.

In February of 2012 the drilling paid off and the lake’s surface was reach, but because of extreme care taken not to contaminate the lake’s water, it has taken until January 10, 2013 to finally extract what is believed to be a pure sample of the 20 million year old water.  The entire project has been going on for 23 years.

According to a Russian news agency, “The first core of transparent lake ice, 2 meters long, was obtained on January 10 [2013] at a depth of 3,406 meters. Inside it was a vertical channel filled with white bubble-rich ice.”

The world awaits news of the nature of Lake Vostok’s water and the secrets it might hold.  What is expected is an intense study of the physical and chemical qualities of the water ice and an investigation into whether there are signs of microbial life.