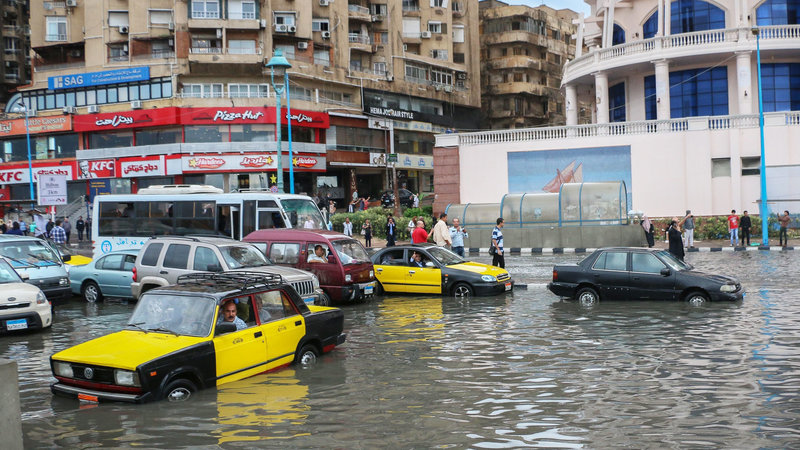 Flooding is now commonplace in Alexandria, and it continues to get worse.

Alexander the Great established the city more than 2,000 years ago. In that time, it has survived invasions, fires and earthquakes. But, Alexandria now faces severe flooding from rising waters blamed on climate change.

Alexandria is Egypt’s second largest city, with more than 5 million people. It is also an important port and home to about 40 percent of Egypt’s industrial activity. The city is surrounded on three sides by the Mediterranean Sea and sits next to a lake. Officials have built concrete barriers in the sea in an effort to reduce the force of waves. A severe storm in 2015 flooded large parts of the city. At least six people were killed in the flooding, which also caused the collapse of many homes.

In the late 1940s and 50s, Alexandria was a popular place for writers and artists from Egypt and other countries. Today, more than 60 kilometers of waterfront make Alexandria a top summer vacation spot. However, many of the city’s most famous beaches are already showing signs of damage.

The United Nations has warned that worldwide sea levels could rise by 0.98 meters by 2100, with “serious implications for coastal cities, deltas and low-lying states.”

Measurements show that the land on which Alexandria is built is also sinking at about the same rate. This is expected to increase the risk of dangerous flooding.

A 2018 research study predicted that up to 734 square kilometers of the Nile Delta could be under water by 2050. People living in low-lying areas are already experiencing problems.

A 52-year-old resident of the Shatby neighborhood, Abu Randa, said he has repaired his three-story home twice since the 2015 floods. “We know it is risky. We know that the entire area will be underwater, but we have no alternative,” he told The Associated Press.

Sayed Khalil is a 67-year-old fisherman living in the el-Max neighborhood, where hundreds of people were forced to leave their homes after the flooding in 2015. He said homes have flooded with seawater every winter in recent years. “It is hard to imagine that el-Max will be here in a few decades,” Khalil said. “All these houses might vanish. The area you see now will be an underwater museum.”

The government built sea defenses to protect the neighborhood, but people who live there say it has not made a big difference. “Every year the waves are much stronger than the previous year,” said Abdel-Nabi el-Sayad, a 39-year-old fisherman. “We did not see any improvement. They just forced people to leave.”

Some of the city’s archaeological treasures are also threatened. Among them is the citadel of Qaitbay, a fortress built in the Middle Ages on the ruins of the ancient Pharos lighthouse in the central harbor.

Ashour Abdel-Karim is head of Egypt’s General Authority for Shores Protection. He said the citadel is especially at risk. Powerful waves continue to push against the structure’s foundation. Officials were forced to build a long line of concrete sea barriers that can be seen from the downtown waterfront area known as the Corniche.

The Egyptian government has put aside more than $120 million for the barriers and other protective measures along the shore, Abdel-Karim said. He added that without barriers, parts of the Corniche and other buildings near the shore would be damaged. If that happens, he said, repairs could cost nearly $25 billion.