Methane in Well Water: How to Get Rid of It 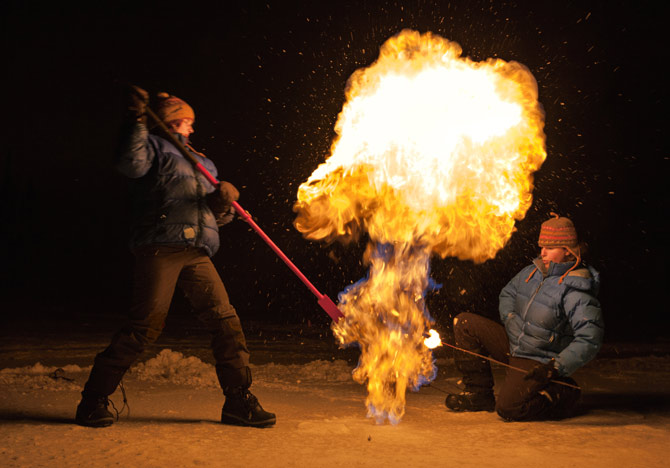 Gazette Introductory Note: Methane removal from water has become a public concern recently because of spectacular internet videos showing flaming tap water in areas where hydraulic fracturing for petroleum production has caused gas intrusions into water wells. There are a lot of myths about how methane is removed from water.  Here’s a good overview of treatment for methane from the Minnesota Department of Health.

Methane will not be removed by common water treatment devices such as sediment filters, water softeners, or carbon filters. Most removal or treatment techniques involve aeration. A gas shroud, attached to a submersible pump in the well, may provide relief in some circumstances. Fittings that drain back or aerate water into the well have been used, but are not particularly effective, and may cause other problems such as well corrosion or plugging.

Aeration is the process of mixing air into water and venting the gas to the outside atmosphere. Aeration can remove methane, as well as other gasses such as hydrogen sulfide (rotten egg smell).

Treatment devices range from the simple to the complex. The simplest is to use a pressure tank without a bladder or diaphragm, often referred to as a “galvanized” tank. An air release valve, vented to the atmosphere, releases the methane. This system is relatively simple and inexpensive, and does not require a second pump or tank, but is relatively inefficient at treating large volumes of water or removing large quantities of methane.

A more effective, but more complicated, system is to add an aspirator or aerator to the inlet of a water storage tank. An air pump or compressor will speed up the methane removal, but adds expense and maintenance.

Waterfall, diffusion, or mechanical aerators are devices that more effectively mix air with the water, resulting in more rapid and efficient removal, but increased cost and maintenance. Some systems involve a storage/treatment tank system with spray aerators enclosed in the tank. Use of an unpressurized treatment tank will require two pumps and two tanks – a well pump and a re-pressurizing pump, and a treatment tank and a pressure tank. Retention times of several minutes are typically needed to allow release of the methane. Air separators, similar to devices used on hot water heating systems to remove air, have also been used to remove methane.