The Cost of Agricultural Nutrient Runoff 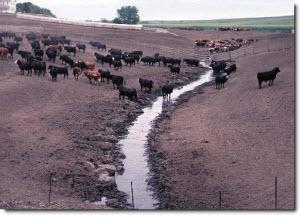 The following excerpt, published in the June 2019 issue of Water Finance and Management magazine,  recognizes the top polluter of US water today, agricultural runoff, and shows why it’s such a hard problem to solve.

Water quality is a major problem throughout the United States. But it’s not nearly as bad as it used to be. In 1969, the Cuyahoga River in Cleveland was so polluted that is actually caught fire! That made headlines all across the country and galvanized the U.S. Congress into passing the Clean Water Act (CWA) in 1072 over the veto of President Nixon. The CWA contained a funding provision called the construction grant program to be administered by the U.S. Environmental Protection Agency (EPA). Over the next 15 years, EPA handed out over $70 billion of funds to local governments or authorities for sewer projects. The construction grant program required a local match. So, between federal grants and the local matching funds, the US spent well over $100 billion controlling urban water pollution between 1972 and 1987.

By 1987, EPA had tired of watching abuses in its grant program and Ronald Reagan, who was no friend of grants to begin with, was president. So, the CWA was amended to replace the construction grant program with a loan program called the Clean Water State Revolving Fund (CWSRF).

In 1972, when the CWA was first passed, urban sewage was the No. 1 source of water pollution…Since 1987, the CWSRF has provided more than $135 billion of financial assistance for almost 40,000 clean water projects.

Between the $100 billion construction grant program and the $135 billion spent by the CWSRF and the hundreds of billions of dollars more that has come from the municipal bond market, we have pretty much won the war on urban sewage. It is no longer the No. 1 water pollution problem.

Now the No. 1 source of water pollution in the United States is agricultural runoff. But in terms of attacking this problem, we have an “equipment” issue. The “equipment” is the payment method. Both the municipal bond market and the CWSRF – the two major sources of funds for water pollution abatement – are ill suited to making, say, a $50,000 loan to a farmer for a Best Management Practice (BMP) that would reduce agricultural runoff.

There is a second problem, which is worse: who pays? When the CWSRFs lend money to wastewater authorities, these agencies usually have tens of thousands of ratepayers over whom they can spread the cost. An upgrade to their treatment plant might cost $10 million. But they could borrow 100 percent of this money from their CWSRF” at a low interest rate and spread the cost across their users for a small fee.

Contrast this with a farmer who can build a constructed wetland on 2 acres of his land that he doesn’t need for crops. This would certainly make a major reduction in the runoff from his farm. The wetland might cost $100,000. The farmer could also borrow from the CWSRF under the same terms,” but the farmer would have to pay for the entire amount.

There is no legal authority in the CWA to require the farmer to do anything. He can simply go on polluting.”

The author goes on to suggest two possible solutions to this problem including sponsorship by a government entity and adoption by a publicly owned treatment works system that can receive credits on pollution permits for assisting in the project.