CORPUS CHRISTI, Texas – The Gulf of Mexico may be far from the corn fields of the Midwest, but it’s those fields that are causing a big problem for the gulf coast water this year. The National Oceanic and Atmospheric Administration (NOAA) predicts a record-size “dead zone” in the Gulf this summer, stretching from South Texas all the way to Alabama.

Dr. Paul Montagna, Chair and Professor for the Harte Research Institute for Gulf of Mexico Studies (HRI), has studied these “dead zones”, also known as hypoxia zones, for more than 20 years.

“The zone sets up in late spring and lasts throughout the summer,” said Montagna.

The “dead zone,” is caused when nitrogen-based fertilizer washes off farm fields, in the Midwest corn-belt, and ends up in the Mississippi River, which flows into the Gulf.     Just as nitrogen-based fertilizer makes corn grow, it also stimulates the growth of plants in the water, mainly algae.  The algae bloom and eventually die and decay.  This process removes oxygen from the water, resulting in oxygen-depleted water where marine life can’t live. 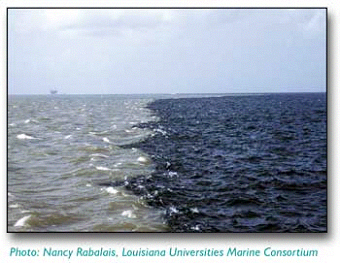 This year’s “dead zone” is expected to be as large as 8,561 square miles along the Gulf coast which is a rich breeding ground for fish, shrimp, oysters and crab.  It’s an area that accounts for about 18 percent of the total commercial seafood sold in the United States.   Shrimp and oyster supplies, in particular, are heavily concentrated in the Gulf, making the seafood industry an important component of the Gulf Coast economy.

“The hypoxia zones are not dangerous to fish, but cannot support bottom-dwelling life such as clams, crabs and shrimp,” said Montagna.  “Because fish avoid these areas, commercial shrimp boats and recreational fisherman must go further out, to open water, to make their catch.”

Dr. Larry McKinney, Executive Director of HRI, says this yearly threat to the Gulf is caused by one thing, ethanol.

So what does the large size of this year’s hypoxia zone in the Gulf of Mexico have to do with ethanol, made from corn grown in the Midwest?  Corn prices are high right now, so farmers are planting more of it.  While you can grow many crops without fertilizer, corn requires it.  The USDA estimates as much as 40 percent of last year’s corn crop was used to make ethanol.

Last summer was one of the smallest “dead zones” on record at 2,889 square miles.  Experts with NOAA say the drought in the Midwest last year kept runoff out of the Mississippi River.  This year will be just the opposite.  Heavy rainfall in the Midwest this spring led to flood conditions, with states like Minnesota and Illinois experiencing one of the wettest springs on record.  All of that flooding, along with bigger corn crops, means more fertilizer flowing into the Gulf.

“Dead zones” normally peak in July and August, and start to break-up in the fall.  The only thing that would fix the situation sooner is a tropical storm or a hurricane to stir up the water and re-oxygenate the area.