In general, putting new media into a water softener or tank-style filter is like screwing the lid off of a bottle, dumping out the contents, then refilling the bottle. What complicates the procedure is largely that it is a very big bottle and it is often located in an inconvenient place. It doesn’t have to be a hard job, but it can be a messy job.  Here are suggested steps: 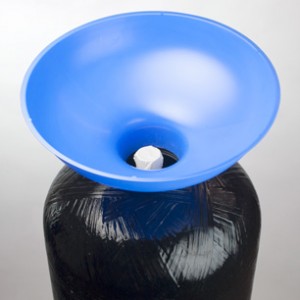 Using a media funnel. Note that the dip tube is covered to keep media from getting inside the tube (and subsequently into the home’s service lines).