Strange Finds on Beaches in Mexico and South Florida 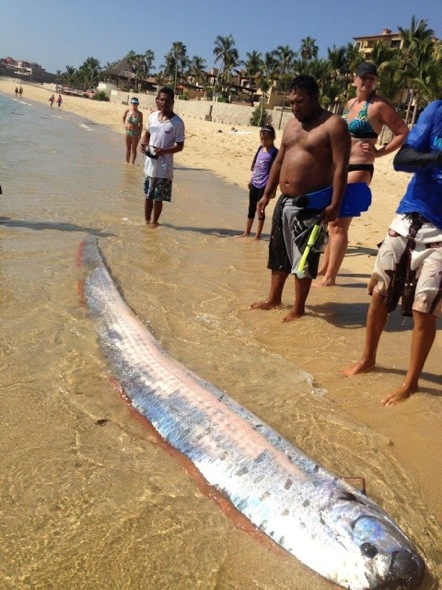 Giant Oarfish that died shortly after arriving on the Beach at Cabo San Lucas, Mexico.

A rare creature from the deep ocean, a very large oarfish, washed onto a Mexican beach and died, although attempts were made to revive him and return him to the Sea of Cortez.   The fish in the picture is approximately 15 feet long.  Oarfish, though rarely seen, have been known to reach 30 feet in length.

Oarfish inhabit the world’s oceans but are found in the dark depths between about 600 and 3,000 feet. On the rare occasions one is seen on or near a beach–this happens very rarely and sporadically–it’s either sick or injured, dying or already dead.

Their silver bodies have no scales and the fish swim with undulating motions, serpent-like.

In an unrelated event, a giant eyeball of an unknown creature was found by a beach visitor on Pompano Beach, Florida.  The eyeball is slightly larger than a baseball and presumably belonged to some kind of marine animal. 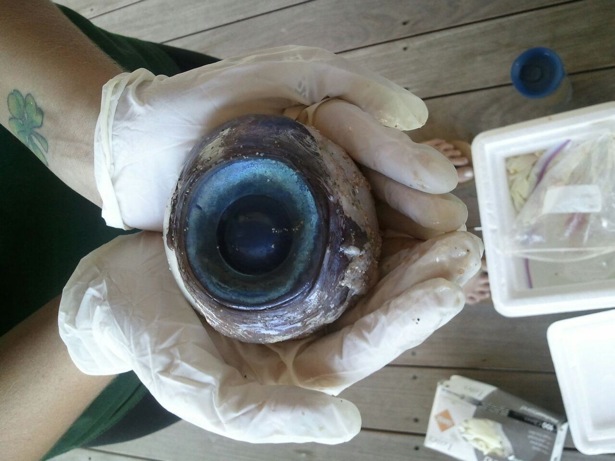 The eyeball is being preserved and will be delivered to a research lab in St. Petersburg, where it’s hoped an official identification can be made.

More details on the eyeball.

More about the oarfish from the Sea of Cortez.