NGURUBANI, Kenya (Thomson Reuters Foundation) – When Rose Wanjiku first moved to her home in Central Kenya province 14 years ago, the region received four months of rain every year. The rains began in April and again in October, and were sufficient for a small-scale farmer such as herself to grow staples like maize and beans to feed her family and sell the surplus at local markets.

Today the Ngurubani area gets only two months of rain a year. Because of the growing scarcity, Wanjiku has resorted to irrigating her crops with water pumped from the Thiba River when rains fail in mid-season. Even though the river is just a stone’s throw away from her house and fields, the water pump means extra expenses for her household.

“Farming has become very expensive for us these days. We hardly make profits,” said her husband Munene. His wife added that the river water cannot be used for household purposes because it is too muddy. 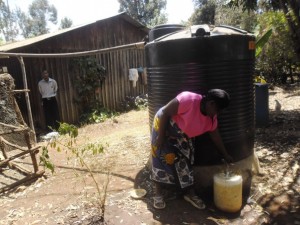 To counter the water shortages, Wanjiku, 45, has begun harvesting rainwater. Her roof is fitted with gutters and through a loan fromSMEP, a Kenyan microfinance programme, she has bought a 2,300-litre (600-gallon) water tank to store the harvested water.

Rainwater gathered since April has been sustaining her household until the rains are due to begin again next month.

Wanjiku began making loan payments of 1,000 Kenyan shillings (around $11) a month in February, and aims to clear the loan by November.

The frustrations of poor rainfall also have taken a toll on Margaret Njeri Muthee, 38, another farmer and secretary of the 12-member Wendani Women’s Group, which also counts Wanjiku as a member.

Njeri recalls that when she first moved to Ngurubani 15 years ago, rains were regular and she was able to harvest up to two 90kg bags of beans per acre of land.  Today she gets half a bag of beans at most.

“The weather has really changed here – there is a chill I never saw before, destroying our staples,” Njeri said. Because of the unpredictable weather and poor crop yields, Njeri now rears pigs, in addition to chickens and cattle.

“I’m tired of farming maize and beans,” she added.

As a result of increasingly short rainfall, Njeri was spending 400 shillings (nearly $5) every week to pay for a donkey-drawn cart to fetch water from the Thiba River, over a kilometre away from her home. But now she, too, has a water tank, bought on credit from SMEP.

Njeri and Wanjiku are among over 7,000 Kenyan recipients of an ongoing water credit scheme accessed through microfinance institutions such as SMEP. The scheme enables households to buy tanks to capture and store clean rainwater that runs from rooftops along the gutters.

Of the loan recipients, 92 percent are women. According to Patrick Alubbe, East Africa regional director of Water.Org, a nongovernmental organisation, it is the women in households who must spend hours searching for water, and this makes them appreciate the scheme, as it saves them time.

SMEP has given 821 water-related loans so far, with repayment rates of more than 90 percent, according to Fridah Njeru, SMEP’s senior programmes coordinator.

Kenya has 29,000 beneficiaries of water-related loans countrywide, with some funds going to building latrines or fix sewer systems to improve sanitation. The scheme also operates in Uganda, Bangladesh and India.

With a tank to harvest rainwater, Wanjiku says she no longer needs to wait for mud in collected river water to settle at the bottom of her containers so that she can use it at home.

Kenya’s average annual rainfall is 630 mm, which qualities it as a water-scarce country, according to a study published by the U.N. Food and Agriculture Organization. However, a study by the Southern and Eastern Africa Rainwater Network notes that large groundwater aquifers represents a valuable water resource not directly related to or dependent on rainfall patterns.

Experts are pointing to aquifers as the country’s next important source of water. This comes following the recent discovery of aquifers in the drought-hit Turkana region in Kenya’s north, where rainfall does not exceed 450mm annually.