The International Primate Protection League issued a complaint about the cost and pointlessness of a project being conducted at public expense by two experimenters at the Yerkes Primate Center in Atlanta. The project’s purpose is to measure the penis length of gibbons, gorillas, chimpanzees, and other nonhuman primates.

The experimenters retaliated with an article in the Laboratory Primate Newsletter in which they listed eleven important hypotheses they are testing with their measurements. The most important of these is reproductive biologist R. V. Short’s belief that “the difference in size and visibility of the penis in the common chimpanzee and gorilla represent an example of ‘form reflects function.'”

Another central questions they are exploring is, “Do these hypotheses accurately characterize the gibbon or, by implication, does social structure ( monogamy vs. polygamy) have a prepotent influence on the reproductive parameters?” To understand this, you must know that “the male gibbon has a relatively short, dark penis.”

The Gazette’s comment: It is hard to understand how nonhuman primates have reproduced themselves so effectively through the ages knowing so little about how penis length affects their reproductive parameters. It’s about time that we have some good, solid statistics on gorilla penis length, and for far too long we have needed answers about the relative shortness of the gibbon’

The Gazette feels that these researchers should be commended, for no matter how you go about it, measuring gorillas’ penises has to be a risky business. 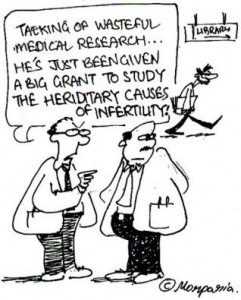