The New York Times reports that a deadly virus, porcine epidemic diarrhea, or PEDv, is estimated to have killed, on average, more than 100,000 piglets and young hogs each week since it first showed up in Iowa in May 2013, wreaking havoc on the pork industry and causing concerns for drinking water safety.

The fatality numbers are so staggering that environmentalists have grown worried about the effects of state laws requiring the burial of so many carcasses, and what that will do to the groundwater.

“We know there is a lot of mortality from this disease, and we’re seeing evidence of burial in areas with shallow groundwater that a lot of people rely on for drinking water and recreation,” said Kelly Foster, senior lawyer at the Waterkeeper Alliance, an environmental group.

Waterkeeper wants to put a mass disposal plan into effect, and wants it to declare a state of emergency. On its website and YouTube, the organization has posted photos of dead piglets barely covered with earth and boxes overflowing with the bodies of young pigs, although it is unclear whether all were victims of the virus. 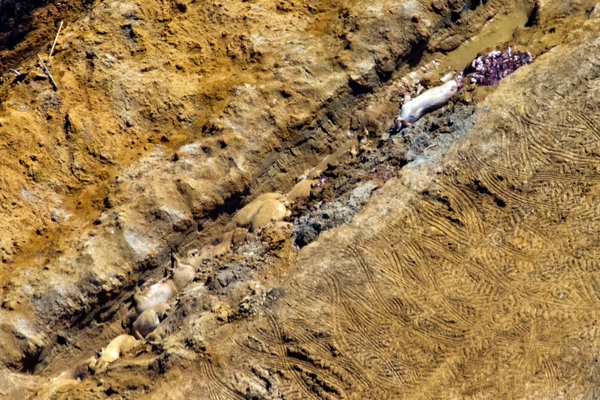 Precisely how many pigs have died from the virus, which causes acute diarrhea that is virtually 100 percent lethal for piglets two to three weeks old, is unknown. The Agriculture Department did not require reporting of the disease until June 5, and it does not collect data on how many pigs the virus has killed, instead referring the question to the hog industry — which does not like to talk about it.

Waterkeeper says that the sheer volume of dead animals poses an environmental threat.

“They’re very secretive about how many pigs have died in North Carolina, but we estimate that it’s about two million over the last year or so,” said Rick Dove, a retired Marine Corps lawyer who has taken aerial photos of pig farms for Waterkeeper’s North Carolina affiliate. “They can’t move those pigs off the farm because it will spread disease, so they’re being buried in ground along the coastal waterways where the groundwater level is high.”

State regulation requires the bodies to be buried at least two feet underground, which in many places means the dead pigs come into contact with groundwater, Mr. Dove said.

The virus does not infect humans. As the corpses decompose, however, they can become hosts for bacteria and other pathogens.

Each state has its own requirements for the disposal of carcasses. Iowa, one of the largest hog-producing states, has a set of disposal methods for use during emergency disease outbreaks. They range from burial and rendering to use of alkaline hydrolysis, a highly specialized process using chemicals and heat to break down tissues.

An Iowa State University publication describing various processes for disposing of carcasses during an epidemic estimated that it would take a pit six feet deep, 300 feet long and 10 feet wide to hold 2,100 pigs, and the pit would need to be covered with three to six feet of dirt in a site marked by GPS coordinates and regularly inspected.

North Carolina issued a warning to a pig operation for having an open burial pit on its property, Ms. Foster, the Waterkeeper lawyer, said. The organization brought the issue, which it documented with aerial photos of the farm, to the attention of the state agriculture department.

The North Carolina Farm Bureau contends that such photographs create unnecessary expenses for its members. “Third parties are making complaints to environmental regulators, and using aerial photography to document what they say are violations,” said Paul Sherman, director of the farm bureau’s air and energy programs. “The vast majority of those cases are unfounded, but farmers still have to deal with it, it eats up a good part of a day or two and often the same complaints come up multiple times.”