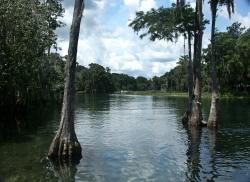 Florida’s Caloosahatchee River Has Been Abused By the U. S. Army Corps of Engineers According to An Environmental Lawsuit

Florida–have joined Earthjustice to file suit in federal court against the US Army Corps of Engineers alleging that the Corps has violated water protection laws regarding Florida’s Caloosahatchee River.

The Caloosahatchee, officially designated as a public drinking water source, has been covered with slimy green algae outbreaks in eight of the past 11 years, and an outbreak slimed the river in late July 2012.  According to Earthjustice, the algae releases a nauseating smell, gives people respiratory problems, causes massive fish kills and harms many wild species.

Cities drawing drinking water from the Caloosahatchee have also had to quit using the water because it is unsafe to drink in spite of extensive treatment.

The suit is filed against the U.S. Army Corps of Engineers, because it has allegedly caused the Caloosahatchee’s problems by cutting off the river’s water supply. The Corps operates three water control structures that regulate the flow of water from Lake Okeechobee to the Caloosahatchee estuary at the Gulf of Mexico. According to Earthjustice, instead of providing the Caloosahatchee with the flow it needs to stay healthy, the Corps diverts water to irrigate 500,000 acres of sugar cane fields south of Lake Okeechobee, leaving the river stagnant and polluted.

The river has a nasty stench  in downtown Fort Myers, and many dead fish have washed up on the beaches in front of condos and hotels in Naples.

More Details about the Caloosahatchee Lawsuit.