Politics of the Global Water Shortage

Why global water shortages pose threat of terror and war

From California to the Middle East, huge areas of the world are drying up and a billion people have no access to safe drinking water. US intelligence is warning of the dangers of shrinking resources and experts say the world is ‘standing on a precipice’

On 17 January, scientists downloaded fresh data from a pair of Nasa satellites and distributed the findings among the small group of researchers who track the world’s water reserves. At the University of California, Irvine, hydrologist James Famiglietti looked over the data from the gravity-sensing Grace satellites with a rising sense of dread. 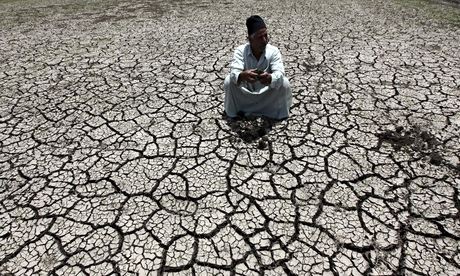 The data, released last week, showed California on the verge of an epic drought, with its backup systems of groundwater reserves so run down that the losses could be picked up by satellites orbiting 400km above the Earth’s surface.

“It was definitely an ‘oh my gosh moment’,” Famiglietti said. “The groundwater is our strategic reserve. It’s our backup, and so where do you go when the backup is gone?”

That same day, the state governor, Jerry Brown, declared a drought emergency and appealed to Californians to cut their water use by 20%. “Every day this drought goes on we are going to have to tighten the screws on what people are doing,” he said.

Seventeen rural communities are in danger of running out of water within 60 days and that number is expected to rise, after the main municipal water distribution system announced it did not have enough supplies and would have to turn off the taps to local agencies.

There are other shock moments ahead – and not just for California – in a world where water is increasingly in short supply because of growing demands from agriculture, an expanding population, energy production and climate change.

Already a billion people, or one in seven people on the planet, lack access to safe drinking water. Britain, of course, is currently at the other extreme. Great swaths of the country are drowning in misery, after a series of Atlantic storms off the south-western coast. But that too is part of the picture that has been coming into sharper focus over 12 years of the Grace satellite record. Countries at northern latitudes and in the tropics are getting wetter. But those countries at mid-latitude are running increasingly low on water.

“What we see is very much a picture of the wet areas of the Earth getting wetter,” Famiglietti said. “Those would be the high latitudes like the Arctic and the lower latitudes like the tropics. The middle latitudes in between, those are already the arid and semi-arid parts of the world and they are getting drier.”

On the satellite images the biggest losses were denoted by red hotspots, he said. And those red spots largely matched the locations of groundwater reserves.

The Middle East, north Africa and south Asia are all projected to experience water shortages over the coming years because of decades of bad management and overuse.

Watering crops, slaking thirst in expanding cities, cooling power plants, fracking oil and gas wells – all take water from the same diminishing supply. Add to that climate change – which is projected to intensify dry spells in the coming years – and the world is going to be forced to think a lot more about water than it ever did before.

The losses of water reserves are staggering. In seven years, beginning in 2003, parts of Turkey, Syria, Iraq and Iran along the Tigris and Euphrates rivers lost 144 cubic kilometres of stored freshwater – or about the same amount of water in the Dead Sea, according to data compiled by the Grace mission and released last year.

A small portion of the water loss was due to soil drying up because of a 2007 drought and to a poor snowpack. Another share was lost to evaporation from lakes and reservoirs. But the majority of the water lost, 90km3, or about 60%, was due to reductions in groundwater.

Farmers, facing drought, resorted to pumping out groundwater – at times on a massive scale. The Iraqi government drilled about 1,000 wells to weather the 2007 drought, all drawing from the same stressed supply.

In south Asia, the losses of groundwater over the last decade were even higher. About 600 million people live on the 2,000km swath that extends from eastern Pakistan, across the hot dry plains of northern India and into Bangladesh, and the land is the most intensely irrigated in the world. Up to 75% of farmers rely on pumped groundwater to water their crops, and water use is intensifying.

Over the last decade, groundwater was pumped out 70% faster than in the 1990s. Satellite measurements showed a staggering loss of 54km3 of groundwater a year. Indian farmers were pumping their way into a water crisis.

The US security establishment is already warning of potential conflicts – including terror attacks – over water. In a 2012 report, the US director of national intelligence warned that overuse of water – as in India and other countries – was a source of conflict that could potentially compromise US national security.

The report focused on water basins critical to the US security regime – the Nile, Tigris-Euphrates, Mekong, Jordan, Indus, Brahmaputra and Amu Darya. It concluded: “During the next 10 years, many countries important to the United States will experience water problems – shortages, poor water quality, or floods – that will risk instability and state failure, increase regional tensions, and distract them from working with the United States.”

Water, on its own, was unlikely to bring down governments. But the report warned that shortages could threaten food production and energy supply and put additional stress on governments struggling with poverty and social tensions.

Some of those tensions are already apparent on the ground. The Pacific Institute, which studies issues of water and global security, found a fourfold increase in violent confrontations over water over the last decade. “I think the risk of conflicts over water is growing – not shrinking – because of increased competition, because of bad management and, ultimately, because of the impacts of climate change,” said Peter Gleick, president of the Pacific Institute.

There are dozens of potential flashpoints, spanning the globe. In the Middle East, Iranian officials are making contingency plans for water rationing in the greater Tehran area, home to 22 million people.

Egypt has demanded Ethiopia stop construction of a mega-dam on the Nile, vowing to protect its historical rights to the river at “any cost”. The Egyptian authorities have called for a study into whether the project would reduce the river’s flow.

Jordan, which has the third lowest reserves in the region, is struggling with an influx of Syrian refugees. The country is undergoing power cuts because of water shortages. Last week, Prince Hassan, the uncle of King Abdullah, warned that a war over water and energy could be even bloodier than the Arab spring.

The United Arab Emirates, faced with a growing population, has invested in desalination projects and is harvesting rainwater. At an international water conference in Abu Dhabi last year, Crown Prince General Sheikh Mohammed bin Zayed al-Nahyan said: “For us, water is [now] more important than oil.”

The chances of countries going to war over water were slim – at least over the next decade, the national intelligence report said. But it warned ominously: “As water shortages become more acute beyond the next 10 years, water in shared basins will increasingly be used as leverage; the use of water as a weapon or to further terrorist objectives will become more likely beyond 10 years.”

Gleick predicted such conflicts would take other trajectories. He expected water tensions would erupt on a more local scale.

“I think the biggest worry today is sub-national conflicts – conflicts between farmers and cities, between ethnic groups, between pastoralists and farmers in Africa, between upstream users and downstream users on the same river,” said Gleick.

And new fault lines are emerging with energy production. America’s oil and gas rush is putting growing demands on a water supply already under pressure from drought and growing populations.

More than half the nearly 40,000 wells drilled since 2011 were in drought-stricken areas, a report from the Ceres green investment network found last week. About 36% of those wells were in areas already experiencing groundwater depletion.

How governments manage those water problems – and protect their groundwater reserves – will be critical. When California emerged from its last prolonged dry spell, in 2010, the Sacramento and San Joaquin river basins were badly depleted. The two river basins lost 10km3 of freshwater each year in 2012 and 2013, dropping the total volume of snow, surface water, soil moisture and groundwater to the lowest levels in nearly a decade.

Without rain, those reservoirs are projected to drop even further during this drought. State officials are already preparing to drill additional wells to draw on groundwater. Famiglietti said that would be a mistake.

“We are standing on a cliff looking over the edge and we have to decide what we are going to do,” he said.

“Are we just going to plunge into this next epic drought and tremendous, never-before-seen rates of groundwater depletion, or are we going to buckle down and start thinking of managing critical reserve for the long term? We are standing on a precipice here.”