Plastiglomerate — Will This Be Our Gift to the Future?

Melted plastic trash on beaches can sometimes mix with sediment, basaltic lava fragments and organic debris (such as shells) to produce a new type of rock material, new research shows. 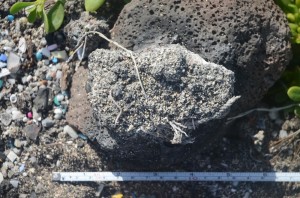 The new material, dubbed plastiglomerate, will forever remain in Earth’s rock record, and in the future may serve as a geological marker for humankind’s impact on the planet, researchers say.

Plastic pollution is a worldwide problem affecting every waterway, sea and ocean in the world, according to the Natural Resources Defense Council. First produced in the 1950s, plastic doesn’t break down easily and is estimated to persist in the environment for hundreds to thousands of years. Plastic debris is also lightweight, allowing it to avoid being buried and becoming a part of the permanent geological record.

But while at Hawaii’s Kamilo Beach, Capt. Charles Moore, an oceanographer with the Algalita Marine Research Institute in California, found that plastic, if melted, can actually become one with rocks, sediment and other geologic materials. [See Images of the Plastiglomerate Rock at Kamilo]

“He found some plastic had been melted to rocks, and other pieces of natural material had also been stuck on it,” said study lead author Patricia Corcoran, a geologist at the University of Western Ontario (UWO) in Canada. “He didn’t know what to call it. It’s possible other people have found [the plastic conglomerates] at other locations before Captain Moore did, but nobody had thought to report it or identify it.”

Corcoran attended a presentation Moore gave about his find, and she became immediately interested in investigating the material. So she, along with Moore and Kelly Jazvac, a visual artist at UWO, headed to Kamilo Beach to analyze the plastic formations.

Kamilo Beach, located on the southeastern tip of the Big Island of Hawaii, is often considered to be one of the dirtiest beaches in the world. Because of the current flow and high wave energy of the area, the beach is covered with plastic debris pulled in from the ocean, including fishing gear, food and drink containers and multicolored plastic fragments called “plastic confetti.”

The researchers discovered there are two types of plastiglomerates at Kamilo Beach: In situ and clastic.

In situ plastiglomerate is more rare than the clastic variety, and forms when “plastic melts on rock and becomes incorporated into the rock outcrop,” Corcoran told Live Science, adding that the melted plastic can also get into the rock vesicles, or cavities. Clastic plastiglomerates, on the other hand, are loose rocky structures, composed of a combination of basalt, coral, shells, woody debris and sand that have been glued together by melted plastic. 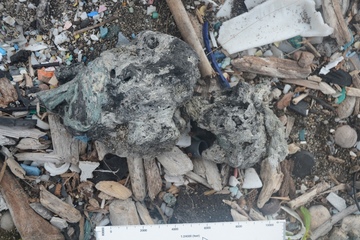 When Moore first discovered Kamilo Beach’s plastiglomerates, he hypothesized that molten lava had melted the plastic to create the new rock. However, the researchers found that lava had not flowed in that area since before plastics were first invented.

After digging further into the mystery and talking with locals, the researchers concluded that people inadvertently created the plastiglomerates after burning plastic debris, either intentionally to try to destroy the plastic or accidentally by way of campfires.

Given this origin for the beach’s plastiglomerates, the team thinks the material could be present at a lot of other beaches around the world, particularly in areas where people camp or live.

“I would say that anywhere you have abundant plastic debris and humans, there will probably be plastiglomerates,” Corcoran said. Additionally, other locations where there is both active volcanism and beaches polluted with plastic, such as Iceland and the Canary Islands, could have lava-produced plastiglomerates, she said.

At present, we live in the Holocene Epoch, which began nearly 12,000 years ago. In recent years, scientists have debated whether to formally identify a new geological era called the Anthropocene, which would mark the time period when human influence significantly altered Earth’s physical, chemical and biological landscape. However, scientists can’t agree when the Anthropocene should begin.

Whatever the case, there are several lines of evidence that highlight humankind’s impact on the planet.

For instance, with the onset of the Industrial Revolution, a lot of carbon dioxide and other greenhouse gases have been pumped into the atmosphere. And even further back, the rise of agriculture some 8,000 years ago fundamentally changed land use and led to increased atmospheric carbon dioxide and methane, as evidenced from analyses of ice cores. Additionally, soil profiles from peat bogs indicate that mining activities and the combustion of leaded gasoline have resulted in increased lead concentrations over the past 300 years, the researchers noted in their study.

With plastiglomerates, scientists now have another global marker for the Anthropocene, Corcoran said. “It definitely shows how humans have interacted with Earth’s biophysical system.”

What’s more, Corcoran and her colleagues have analyzed the clastic plastiglomerates from Kamilo Beach, and found the new material is far denser than plastic-only particles. This suggests plastiglomerates have a much greater potential to become buried and preserved in the rock record than normal plastic debris, and that future generations of scientists will be able to look into the planet’s geological record and find the plastiglomerates.

“One day in the future, people can look at this material and use it as a marker horizon to see that in around 2010, humans were polluting the planet with plastic,” Corcoran said. “But that’s not a legacy we really want.”