Stirring Portraits of People Forced to Live in Flooded Homes 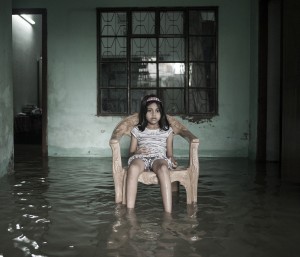 Every year, from June through October, Jashim Salam’s house in Chittagong, Bangladesh, floods. Not once, or twice, but five or six times—per month. It’s like that throughout the city, where several million people live alongside the sea. The water flows in from the Karnaphuli River, pushed beyond its banks by the rising tide of the Bay of Bengal.

This is a recent phenomenon, one many blame on climate change and rising seas coupled with the annual monsoon season. Residents have had to adapt and adjust to the enormous hardships of a life too often lived under water. Salam has been documenting just what it’s like for him and his neighbors. The photographer has produced two series about the flooding. Water World offers an intimate look at life in his neighborhood during a flood. Water World 2 is a powerful series of portraits of people standing in their homes, or in the streets of their communities, surrounded by water.

The portraits are meant to show just how absurd life has become. But it also offers a timeline of sorts. He’s photographed children who have grown up with the flooding and consider it, if not normal, than at least a regular thing. But subjects his age—Salam is 35—and older appreciate how radically their lives and communities have changed. His portraits are both beautiful and shocking. For most, the idea of living knee-deep in water for days on end is incomprehensible.

“It’s very annoying and the people are very fed up,” he says.

To cope, Salam raised the floors on his ground-level home and built walls and other barriers to keep the water at bay. Even so, it always finds a way in. It’s ruined his furniture, shut down his bathroom, and polluted his well, forcing him to boil his water or buy bottled water. Even with these precautions, his wife and their 8-year-old daughter were sickened by the last flood.

“I have been living here for almost 35 years and even my parents have never seen this kind of water level in the city,” Salam says. “If it goes on like this and the water level increase for the next couple of years, maybe I have to shift my own home because I can’t fight every day with flooding water.” 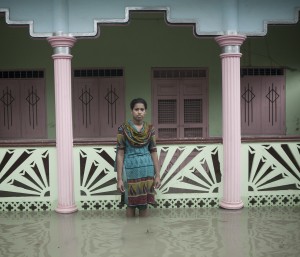 Still, Salam insists he’s luckier than some because he could afford beds tall enough to keep his family off the floor. Less fortunate families sleep on the ground, so when the water comes in they have nowhere to rest at night.

Although the photographer concedes he’s never run across a study directly linking the flooding to climate change, he cites a World Bank study that says Bangladesh will be among the countries most affected by rising temperatures and dwindling polar ice. People will have to contend with higher temperatures, stronger cyclones and rising seas that could wipe out 40 percent of the usable land in Southern Bangladesh by the 2080s. Salam discusses these issues with the people he photographs, hoping to raise awareness of the issue. Most people tend to blame the flooding on poor urban planning, which plays a role in the problem. But he wants them to know there are larger factors in play.

Eventually, Salam hopes to publish his work in a book and exhibit it internationally, perhaps in conjunction with similar projects. He knows the problems facing Bangladesh aren’t unique to the country, and wants to contribute to a growing conversation about how to prevent disasters like this in the future.

“We’re fed up with the flooding,” he says. “We can’t stay like this forever.”