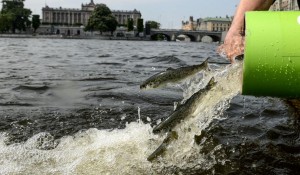 Pharmaceutical waste in surface waters has negatively affected marine life in the past—drugs containing the hormone estrogen making male fish pregnant, for example. But in Sweden, there may something in the water making fish live longer. According to a new study in the Institute of Physics’ Environmental Research Letters, the waste from anxiety medication Oxazepam is decreasing Eurasian perch mortality rates in the surface waters of a Swedish lake.

This is not necessarily a good thing. Researchers from Umea University in Sweden claim that the drug, while extending a fish’s life span, can alter the balance of life in the aquatic environment and might result in serious ecological consequences down the line.

According to Jonatan Klaminder, an environmental scientist and the primary author of the study, health-improving pharmaceuticals have become yet another toxin to consider when testing waters. “Ecotoxicological tests were designed with traditional toxic contaminants in mind, such as heavy metals and dioxins, which have historically been the major apparent threat against aquatic organisms in surface waters. Pharmaceuticals are a new group of contaminants that do not necessarily fit into the traditional view.”

The scientists went out and caught Eurasian perch from a lake in Sweden for the study, then exposed them to two doses, high and low, of Oxazepam. The medication, which is typically used to alleviate anxiety and insomnia in people, frequently contaminates surface waters via wastewater-treatment effluent, the product left behind from treated wastewater. The results found the fish more “bold” and active than the control group that wasn’t treated with Oxazepam.

The study also collected fish eggs from a separate population of Eurasian perch, then exposed them to three different concentrations of the drug during the first nine days of their development. After hatching, a portion of the little fish were analyzed. Results found that the hatched fry’s mortality rates were significantly lower than the control group of fry that weren’t exposed to Oxazepam.

The fish’s increased survival rates are prompting researchers to study the effects of other pharmaceuticals that get dumped into surface waters, including painkillers, antibiotics, hormones and anti-depressants, for possible ecological implications.

“A therapeutic effect leading to increased survival of one species may generate a proportional increase in mortality of that species’ prey, which may have cascading ecological consequences that need consideration,” said Tomas Brodin, co-author of the study. “A new, conceptual view of ecotoxicological testing should include the possibility that a substance can improve the health of an organism and make individuals affected by contamination more competitive than non-affected individuals.”