Over Niagara in a Barrel 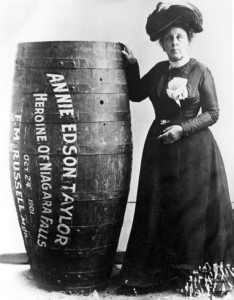 Annie Edson Taylor’s trip over Niagara Falls in a barrel brought her some attention for a short time but never the fortune she hoped for. Here’s an account of the event from history.com.

On October 24 in 1901, a 63-year-old schoolteacher named Annie Edson Taylor becomes the first person to take the plunge over Niagara Falls in a barrel.

After her husband died in the Civil War, the New York-born Taylor moved all over the U. S. before settling in Bay City, Michigan, around 1898. In July 1901, while reading an article about the Pan-American Exposition in Buffalo, she learned of the growing popularity of two enormous waterfalls located on the border of upstate New York and Canada. Strapped for cash and seeking fame, Taylor came up with the perfect attention-getting stunt: She would go over Niagara Falls in a barrel.

Taylor was not the first person to attempt the plunge over the famous falls. In October 1829, Sam Patch, known as the Yankee Leaper, survived jumping down the 175-foot Horseshoe Falls of the Niagara River, on the Canadian side of the border. More than 70 years later, Taylor chose to take the ride on her birthday, October 24. (She claimed she was in her 40s, but genealogical records later showed she was 63.) With the help of two assistants, Taylor strapped herself into a leather harness inside an old wooden pickle barrel five feet high and three feet in diameter. With cushions lining the barrel to break her fall, Taylor was towed by a small boat into the middle of the fast-flowing Niagara River and cut loose.

Knocked violently from side to side by the rapids and then propelled over the edge of Horseshoe Falls, Taylor reached the shore alive, if a bit battered, around 20 minutes after her journey began. After a brief flurry of photo-ops and speaking engagements, Taylor’s fame cooled, and she was unable to make the fortune for which she had hoped. She did, however, inspire a number of copy-cat daredevils. Between 1901 and 1995, 15 people went over the falls; 10 of them survived. Among those who died were Jesse Sharp, who took the plunge in a kayak in 1990, and Robert Overcracker, who used a jet ski in 1995. No matter the method, going over Niagara Falls is illegal, and survivors face charges and stiff fines on either side of the border.