Our Congressman, Dr. Burgess, Sent Us an Email

Our Congressman,  Dr. Burgess,  Sent Us an Email

Our congressman Michael Burgess bravely sent us this email on the 9th anniversary of the Sept. 11 massacre:

“While it has been nine years since the tragic events of September 11, 2001, we as Americans, and many across the world, still feel the stinging grief and sadness we felt on that terrible day.

“Today we remember the 2,977 Americans who perished because of the attacks, and we also remember the 5,661 American soldiers who fought in Iraq and Afghanistan and gave their lives, and thank them for their sacrifice, so that we may be safe and free.

“Our country was deeply wounded that day, and for many the wound has not fully healed. We must never forget, though, the way Americans came together in the days and weeks following the attacks, and presented a united front against evil and hate.

“Some may feel sadness today, others anger – but as we reflect on the anniversary of 9/11, we should all feel pride for our country’s efforts since that day, which have paved the way across the globe for democracy and freedom for those who otherwise would have never known the blessings of liberty.”

Let’s see if I understand.

What Dr. Burgess is saying is that 2,977 Americans died on Sept. 11, 2001, presumably killed by the actions of someone who may have been somehow connected to someone who might have been in Afghanistan, so we Americans, because of the “stinging grief and sadness we felt on that terrible day,” have sacrificed the lives of 5,661 American soldiers in Afghanistan and Iraq “so that we may be safe and free.”

Dr. Burgess does not mention (slipped his mind, I guess) that we freedom-loving Americans in the course of this noble effort to make the world right have killed a countless and never to be counted number innocent Afghan and Iraqi men, women, and children, that we have tortured, raped, and pillaged to our hearts’ content, that we have squandered so much money that we don’t even know how to count it, and that we have poisoned the environment of the nations we have brought “liberty” to to the degree that their lands are barely inhabitable.   Dr. Burgess does not mention that tens of thousands of additional Americans have been wounded and ruined for life both physically and emotionally.  Nor that we have sacrificed what little bit of “honor” we had left as a nation in these imperial endeavors. Nor that the great benefactors of our generous sacrifice have been the ultra rich in America, Afghanistan, and Iraq who have stuffed their pockets full of dollars.

Those are minor issues, apparently, since we have “presented a united front against evil and hate” (that’s the main thing) and we have “paved the way across the globe for democracy and freedom for those who otherwise would have never known the blessings of liberty.” 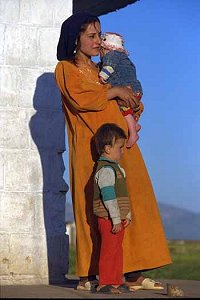 Before we set out to make ourselves “safe and free” by bringing liberty to Iraq, the Gazette published the picture above and asked if this Iraqi family, the “enemy” we were so worried about at the time, would survive our noble endeavor.  I don’t know the answer to this question, but I do know that thousands just like them did not survive the consequences of our largesse.