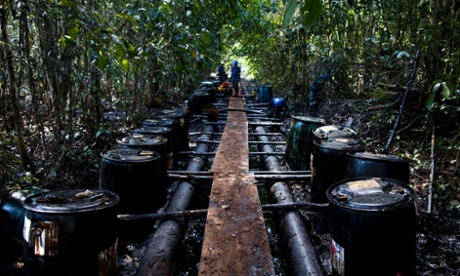 Workers from Argentine firm Pluspetrol clean up after an oil spill in the Peruvian Amazon.

Around 500 Achuar indigenous protesters have occupied Peru’s biggest oil field in the Amazon rainforest near Ecuador to demand the clean-up of decades of contamination from spilled crude oil.

The oilfield operator, Argentine Pluspetrol, said output had fallen by 70% since the protesters occupied its facilities on Monday – a production drop of around 11,000 barrels per day.

Native communities have taken control of a thermoelectric plant, oil tanks and key roads in the Amazonian region of Loreto, where Pluspetrol operates block 1-AB, the company said on Thursday.

Protest leader, Carlos Sandi, told the Guardian that Achuar communities were being “silently poisoned” because the company Pluspetrol has not complied with a 2006 agreement to clean up pollution dating back four decades in oil block 1-AB.

“Almost 80% of our population are sick due to the presence of lead and cadmium in our food and water form the oil contamination,” said Sandi, president of  FECONACO, the federation of native communities in the Corrientes River.

Pluspetrol, the biggest oil and natural gas producer in Peru, has operated the oil fields since 2001. It took over from Occidental Petroleum, which began drilling in 1971, and, according to the government, had not cleaned up contamination either.

Last year, Peru declared an environmental state of emergency in the oil field.

But Sandi said the state had failed to take “concrete measures or compensate the native people” for the environmental damage caused.

He claimed Achuar communities were not receiving their share of oil royalties and the state had failed to invest in development programmes in the Tigre, Corrientes and Pastaza river basins that had been most impacted by oil exploitation.

He said the Achuar were demanding to meet with the central government to talk about public health, the environment and the distribution of oil royalties.

“We aren’t against oil exploitation or development we are calling for our rights to be respected in accordance with international laws,” he said.

“Conversations are under way to bring a solution to the impasse,” Pluspetrol told Reuters. “A government commission is there and we hope this is resolved soon.”

Over the past year, the Peruvian government has declared three environmental emergencies in large areas of rainforest near the oil field after finding dangerous levels of pollution on indigenous territories.

Peru’s Environment Ministry said in a statement last week that a commission formed by government and company representatives has been assigned to work with communities to tackle pollution problems and other concerns.