Not All Garden Hoses Are the Same

Garden hoses suited to water flowers — not us

Garden hoses are a hot commodity these days as gardeners get their vegetables and flowers in the ground, but should we drink from them?

Kevin Hurst is assistant manager of a Lee Valley Tools in Halifax, Nova Scotia, he said most people don’t read the fine print when they pick out a hose.

“On the back here, [there’s] a warning, ‘this product contains one or more chemicals known to the state of California to cause cancer and birth defects'”.

“I certainly wouldn’t let my kid, or any kid that I knew drink from a hose, it’s a completely unnecessary risk,” said Gideon Foreman, the Toronto, Ontario based executive director of the Canadian Association of Physicians for the Environment.

“One of the concerns certainly around the garden hose is they are not meant to go into a child’s mouth,” he explained. “They’re not meant to be drunk from … they’re not regulated, and there is some danger that the chemicals in the hose, just like other plastics, can leach. 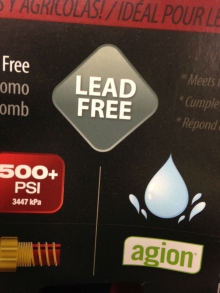 Many Garden Hose Manufacturers Now Market the Safety of Their Product

A non-profit research group in the U.S. called The Ecology Center decided to study which chemicals might be leaching into water being ingested by kids and sprayed on fruit and vegetable gardens.

Last year it tested 21 brands and models of hoses. Lead researcher Jeff Gearhart said they found a range of chemicals, including lead, leaching from those hoses.

The research found that hoses made with PVC and vinyl tended to leach more phthalates and BPA, while those with copper fittings were the worst for lead content.

Health Canada has also weighed in on this. The agency recommends people not drink from hoses, because in addition to the risk of leaching chemicals, dirt, bacteria and small insects can also present a health risk. In an email, a Health Canada spokesperson also suggested that people flush the hose thoroughly with cold water to remove material that may have accumulated in the standing water.

Nicole Mensour lives in Halifax, Nova Scotia with her two children, aged nine and seven. She said she’s not going to stop her kids from taking a drink out of the garden hose.

“I grew up and we all drank from the garden hose, none of us died from it,” she said. “It’s not like they’re drinking from it every day and filling up their water bottles … so it must be minimal.”

Still, the federal government is cracking down on chemicals like phthalates and BPA, banning or limiting them from a range of consumer products.

The California-based Ecology Center recommends you: