Nitrogen and Other Agricultural Chemicals Are Poisoning the Mississippi 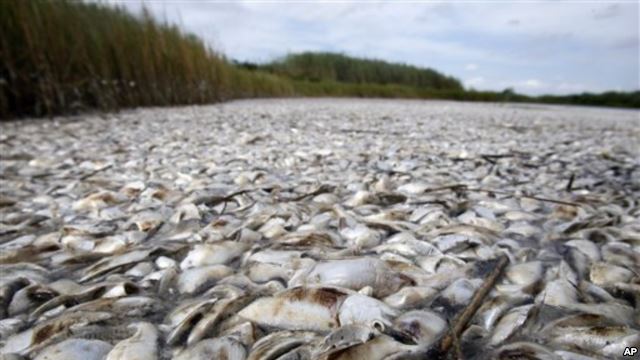 Dead Fish on the Mississippi

Gazette’s Introductory Note: A new study shows what we already knew: farmers are trashing the nation’s water with an overload of  fertilizers and other chemicals and we need to find a better way to grow things.  –Hardly Waite.

Every spring a so-called “dead zone” develops in the Gulf of Mexico near the mouth of the Mississippi River.

Spreading up to 13,600 square kilometers and extending all the way to the eastern Texas shoreline, the zone results from nitrogen-heavy river water pouring into the gulf, where it promotes the growth of algae. As the algae dies, it sinks to the bottom where it decomposes and depletes oxygen from the water, a condition called hypoxia that is deadly to fish and shrimp.

While scientists know what causes a hypoxic zone, a recently published study by two Austin-based hydrogeologists shows the solution may prove a hard sell for those landlocked to the north.

“You can think of it as a spiraling flow back around the bank of the river,” said Cardenas, the study’s lead author. “A water molecule goes into the bank and then comes back out into the river at some downstream point, and it does that repeatedly as it travels downstream.”

And yet nitrate-heavy waters of the Mississippi River have been pouring into the gulf each spring. Determined to find out why, Cardenas, his recent study shows, found that although more than 99 percent of the river’s water does pass through sediment on its way south, the system is overwhelmed by sheer the amount of nitrogen it carries.

The Mississippi river system carries water to the gulf from 33 states and two Canadian provinces where chemicals like nitrogen are used extensively in agriculture. Farmers say the use of such chemicals is essential to produce food for a growing world population.

But Cardenas says his research shows that something needs to be done.

“If you want to curtail this process it has to be at the source, just less inputs from the start,” he said, explaining that the majority of contaminants wreaking havoc on Louisiana’s gulf fishermen are introduced to the water system in states farther to the north.

Aaron Packman, Associate Professor of Civil and Environmental Engineering at Northwestern University, agrees. He says farmers may be able to better control the amount of nitrate fertilizer they put on fields.

“How much fertilizer do you need to give you good yields and then how much is maybe a marginal gain from adding lots more fertilizer?” he said. “There is really a question here: can you maybe [reduce the amount] and get close to the same level of yield without having such a negative impact?”

Packman also says solutions need to be implemented upstream from Louisiana, which has a relatively small section of the river.

“The Mississippi river system is 40 percent of the surface area of the continental United States,” he said. “I think it takes some further work in the distributive areas upstream that are the source of a lot of the nutrient.”

Filtration by the river system has been weakened by human-made “improvements” such as levees and canals that aid transportation and help control floods. But Cardenas says filtration works better when the river meanders through twists and turns, forcing the water to spend more time in the sediment that cleans it.

“A straight channel won’t offer this buffering,” he said. “A very sinuous channel provides a lot of the contact of the river water with the sediment.”

While Louisiana has embarked on a project to divert more river water through wetlands to filter it and increase coastal silt deposits, this will have only a limited effect if states farther upstream do not take action as well.

In coming months, storms will stir the gulf waters and diminish the oxygen-depleted zone, but it will return next year and grow larger in years ahead if something isn’t done to reduce the flow of nitrogen in the Mississippi.

Cardenas’s study appears in a recent issue of Nature Geosciences.