Nitrate Contamination of Drinking Water Is Certain to Increase

Gazette Note:  This important study demonstrates the long-term implications of our excessive use of nitrogen fertilizers.  Nitrate contamination of drinking water is a serious issue, and the study shows that what we do now is polluting the drinking water of future generations. –Hardly Waite.

Nitrogen fertilizer applied to crops lingers in the soil and leaks out as nitrate towards groundwater much longer than previously thought, scientists in France and at the University of Calgary discovered in a new study.

Thirty years after synthetic nitrogen fertilizer had been applied to crops in 1982, about 15 per cent of the fertilizer nitrogen still remained in soil 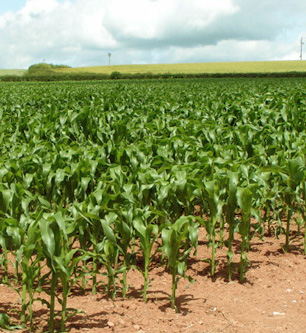 After three decades, approximately 10 per cent of the fertilizer nitrogen had seeped through the soil towards the groundwater and will continue to leak in low amounts for at least another 50 years.

Nitrate is one of the most common groundwater contaminants in rural areas. It is regulated in drinking water primarily because excess levels can cause methaemoglobinemia, or “blue baby syndrome,” which decreases the ability of blood to carry oxygen around the body.

The study was led by researcher Mathieu Sebilo at the Universite Pierre et Marie Currie in Paris, France, and by Bernhard Mayer in the University of Calgary’s Department of Geoscience, and included several research organizations in France.

Their paper, “Long-term fate of nitrate fertilizer in agricultural soils,” was published recently in the Proceedings of the National Academy of Science of the United States of America.

The findings show that losses of fertilizer nitrogen towards the groundwater occur at low rates but over many decades, says Mayer, professor of geochemistry and head of the Applied Geochemistry Group.

That means it could take longer than previously thought to reduce nitrate contamination in groundwater, including in aquifers that supply drinking water in North America and elsewhere, he says.

“There’s a lot of fertilizer nitrogen that has accumulated in agricultural soils over the last few decades which will continue to leak as nitrate towards groundwater,” Mayer says.

Canada and the U.S. regulate the amount of nitrate allowed in drinking water. In the 1980s, surveys by the U.S. Environmental Protection Agency and the U.S. Geological Survey showed that nitrate contamination had probably impacted more public and domestic water supply wells in the U.S. than any other contaminant.

Mayer is an internationally recognized expert in the use of stable isotopes to track contaminants in the environment.

The French-University of Calgary study is the first that tracks, using stable isotope “fingerprinting,” the fate of fertilizer nitrogen remaining in a soil zone over several decades. The research team used a stable isotope of nitrogen, N-15, as a tracer to track fertilizer nitrogen applied in 1982 to sugar beet and winter wheat crops on a pair of two-metre-square plots at a site in France.

The novel aspect of their study was that they subsequently determined the long-term fate of this fertilizer nitrogen ‘pool’ retained in the soil. Their measurements of seepage water from locations two metres deep in the soil revealed the amount of fertilizer nitrate leaking towards the groundwater.

The team found that 61 to 65 per cent of the N-15 fertilizer applied in 1982 was taken up by the sugar beet and wheat plants over the 30-year study.

However, 32 to 37 per cent of the fertilizer nitrogen remained in the soil organic matter in 1985 or three years after application, while 12 to 15 per cent still lingered in the soils after three decades.

Between eight to 12 per cent of the fertilizer nitrogen applied in 1982 had leaked in the form of nitrate toward groundwater during the 30 years, and will continue to leak at low rates “for at least another five decades, much longer than previously thought,” the study says.

The scientists predict that about 15 per cent of the initially applied fertilizer nitrogen will be exported from the soils towards the groundwater over a time span of almost one century after the 1982 fertilizer application.

“If nitrate keeps leaking into the groundwater for decades after fertilizer application, than it will be more difficult to reduce nitrate contamination of groundwaters in a timely fashion,” says Mayer.

Mayer speculates that if the same research were done in Alberta, the findings would be similar in terms of fertilizer uptake by plants and nitrogen retention in the soils, although Alberta’s comparatively dry climate and different geology might slow the rate of nitrate seeping towards the groundwater.