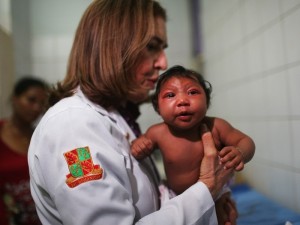 A group of Argentine physicians claim that the sudden microcephaly outbreak in Brazil was not caused by the Zika virus, but by a larvicide injected into the country’s water supplies.

The microcephaly outbreak in Brazil, which coincided with the spread of the Zika virus, continues to stun the world, even months after the incident was first reported.

Pregnant women all over the world have been advised to take caution. The Zika virus infection has been linked to newborn babies with the birth defect microcephaly. This is a congenital condition in which babies are born with unusually tiny heads.

The notion, however, has recently been challenged by a group of Argentine physicians. The group suspects that the Zika virus is not to blame for the rise in microcephaly cases, but that a toxic larvicide introduced into Brazil’s water supplies may be the real culprit.

According to the Physicians in Crop-Sprayed Towns (PCST), a chemical larvicide that produces malformations in mosquitoes was injected into Brazil’s water supplies in 2014 in order to stop the development of mosquito larvae in drinking water tanks.

The chemical, which is known as Pyriproxyfen, was used in a massive government-run program tasked to control the mosquito population in the country. Pyriproxyfen is a larvicide manufactured by Sumitomo Chemical, a company associated with Monsanto.

“Malformations detected in thousands of children from pregnant women living in areas where the Brazilian state added pyriproxyfen to drinking water is not a coincidence,” the PCST wrote in the report.

For instance, the Brazilian Health Ministry had injected pyriproxyfen to reservoirs in the state of Pernambuco. In the area, the proliferation of the Aedes aegypti mosquito, which carries the Zika virus, is very high, the PCST said.

Pernambuco is also the first state in Brazil to notice the problem. The state contains 35 percent of the total microcephaly cases in the country.

The group of Argentine doctors points out that during past Zika epidemics, there have not been any cases of microcephaly linked with the virus. In fact, about 75 percent of the population in countries where Zika broke out had been infected by the mosquito-borne virus.

In countries such as Colombia where there are plenty of Zika cases, there are no records of microcephaly linked to Zika, the group said.

However, the evidence is overwhelming. The Washington Post reported in January that after experts examined 732 cases out of 4,180 Zika-related microcephaly, more than half were not related to Zika at all. Only 270 cases were confirmed as Zika-linked microcephaly.

On top of all the suspicions, however, the World Health Organization (WHO) has been careful not to explicitly link Zika to microcephaly.

“Although a causal link between Zika infection in pregnancy and microcephaly — and I must emphasize — has not been established, the circumstantial evidence is suggestive and extremely worrisome,” said WHO General Director Margaret Chan.

In the meantime, scientists are currently racing toward developing a vaccine for the mosquito-borne infection.

While there is no solid proof yet that the larvicide causes microcephaly, the local government of Grande do Sul in the southern portion of Brazil suspended the use of the chemical larvicide pyriproxyfen.