In a Nutshell:  Although this is hard to believe,  some mining companies are allowed to pump millions of gallons of fresh water from aquifers to dilute polluted wastewater from mining operations so it can be dumped into creeks without violating state regulations.  Florida’s Mosaic, the world’s largest phosphate mining company,  is permitted to pull 70,000,000 gallons per day from 250 wells in an area that has no water to waste.

Last year, a state water agency granted the world’s largest phosphate mining company a permit to pump up to 70 million gallons of water a day out of the ground for the next 20 years.Some of those millions of gallons of water — no one can say how much — is being used by the phosphate giant known as Mosaic to dilute polluted waste so it can be dumped into creeks without violating state regulations.The permit allows Mosaic to withdraw water from more than 250 wells in Hillsborough, Manatee, Polk, Hardee and De Soto counties, an area that since 1992 has been under tight restrictions for any new residential and commercial water use.”The water use is crazy,” said John Thomas, a St. Petersburg attorney who challenged the Mosaic permit on behalf of a client who ended up settling. “They’re pulling an awful lot of water out to discharge with their waste.” 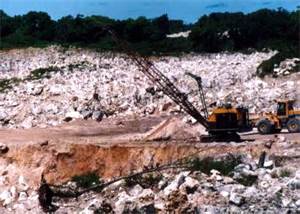 Odd though it may sound, that’s a standard practice for the phosphate industry, according to Santino Provenzano, Mosaic’s environmental superintendent.It’s allowed under the state Department of Environmental Protection’s rules, said Brian Starford of the Southwest Florida Water Management District, the agency commonly known as Swiftmud. Without that freshwater to dilute it, what Mosaic is discharging would violate the DEP’s limits on a type of pollution called “conductivity,” he explained. That term refers to the solids that are left in the waste after it’s processed.”If they were exceeding the standards, the DEP would not allow the discharge,” explained Starford, whose agency issued the Mosaic permit.

Mosaic spokesman David Townsend said the company is only using freshwater for dilution with waste from inactive processing plants, which he said complies with DEP rules. He could not provide a list of where those were located or how many there were.

The diluted waste is discharged “usually into a creek or smaller water body that feeds into a larger one at some point,” he said.

The issue of how much water Mosaic pumps out of the ground was explored by a recent environmental impact study on phosphate mining that was commissioned by the U.S. Army Corps of Engineers. The report found that the miners’ water use in some areas could lower the aquifer by up to 10 feet, but contended the aquifer would eventually recover when the pumping stopped. 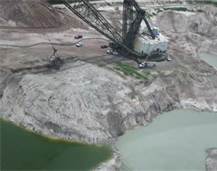 The same agency that issued Mosaic’s water permit, Swiftmud, declared a 5,100-square-mile area covering all or part of eight counties south of Interstate 4 to be the Southern Water Use Caution Area in 1992. The reason: so much water had been pumped out of the aquifer in that region that the water table had fallen 50 feet.

Half of that was being used in the mining process and the other half was being used at production facilities, he said. He said he could not specify how much was being used to dilute the pollution from some plants, a process the industry prefers to call “blending.”

In approving the Mosaic permit, Swiftmud officials had to rule that the company had offered “reasonable assurances” that its use of the water isn’t wasteful and won’t adversely affect downstream users and the environment.

But Thomas questioned whether Swiftmud or Mosaic have ever considered coming up with a different way to deal with the pollution. By repeatedly pumping millions of gallons of water from underground just for blending, he said, the company will leave behind “a swiss cheese aquifer with pools of groundwater contamination and cascades of diluted gyp stack waste for decades.”