Millions of Gallons of Raw Sewage Were Pumped into Newark Bay

Since the onslaught of Hurricane Sandy,  one of the biggest wastewater treatment facilities in the nation has been pumping around 300 million gallons of raw sewage into the Newark Bay.

The plant was disabled by the superstorm Sandy and environmental regulators were not sure when it would be able to resume operations.  Wastewater treatment plants in New Jersey were hit hard by the storm.  In general, plants lack the capacity to keep up with the extra demands put on the system. 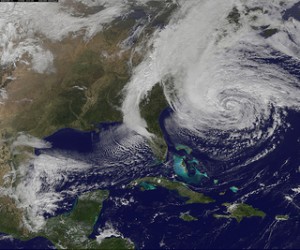 Not even Hurricane Sandy could provoke discussion of climate change from the brain-dead US media.

The disabling of the plant is raising public health concerns, and questions as to whether the facility is adequately prepared to handle strong storms.

Environmentalists said climate change will make storms of the same caliber as Hurricane Sandy more frequent, and that government must invest seriously in its infrastructure to safeguard basic services and environmental quality.

Although service to residential users has been maintained, the sewage disposal systems have in  general been overwhelmed and much raw sewage has simply been released.

The plant is located in Newark across from Jersey City near the mouths of the  Hackensack and Passaic rivers.  During high tides on the rivers,  bay water is pulled northward toward Bergen and Passaic counties. The public should avoid fishing or coming in contact with the waters within a few miles of the plant until further notice,  officials warned.