The harmful toxin responsible for the shutdown of Toledo’s water taps is on the rise, and experts suggest that farming and climate change may be to blame.

Over the weekend, city officials in Toledo, Ohio, asked residents served by the municipal water system to refrain from using their tap water. Up to 500,000 people in the state’s fourth-largest city were told not to drink the water, or to use it for brushing their teeth, for cooking or giving it to their pets. Children and those with weak immune systems were urged not to bathe in the water.
All thanks to a tiny but potent toxin called microcystin. 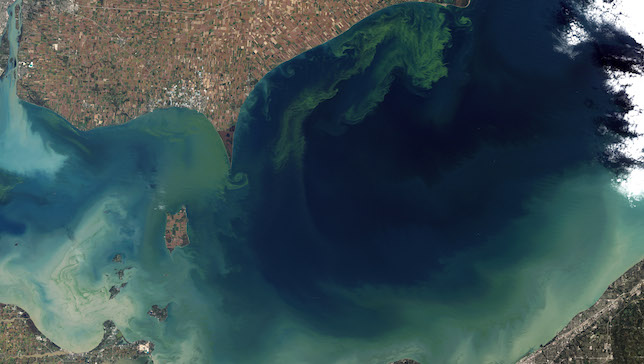 Microcystins are hepatotoxins (liver toxins) produced by cyanobacteria. Cyanobacteria are also known as blue-green algae, and they cast their distinctive hues on surface water when conditions are favorable for growth of algal blooms, according to the EPA. When released, the toxins may persist for weeks to months. While the liver is the favored target of microcystins, skin, eyes and throats can suffer as well.
Blue-green algae are among the oldest organisms on the planet, and they can multiply quickly in water with high nutrient levels — primarily an abundance of phosphorous ­— especially when the water is warm and the weather is temperate.
The Great Lakes area, the world’s largest freshwater system, has been particularly hard-hit by algae blooms. Lake Erie (the source of Toledo’s water) suffered significant blooms between the 1960s and 1980s, fed by urban and industrial waste. Although the lakes got a bit of a reprieve from the blooms in the ensuing years, the last 10 years have seen a steady increase, generally attributed to the agricultural runoff of commercial fertilizer. The last three years have been notably bad. Experts say the return is largely due to changes in farming practices, including larger farms and new fertilizing methods. The result of those trends is more phosphorous heading into the lakes.
Lake Erie has also grown more susceptible to the algal blooms because of invasive species and climate change. “Heavy rains in spring and early summer — a critical time for algal bloom formation — cause more phosphorus to enter the lake through agricultural runoff,” notes The Guardian. “Hotter temperatures then cause the blooms to spread.”
Two invasive species, zebra and quagga mussels, exacerbate the problem due to their dislike of microcystis. “They selectively feed on other phytoplankton species, removing competitors so microcystis can thrive,” says Colleen Mouw, a researcher at the University of Wisconsin-Madison. “As the mussels digest, they release phosphate and ammonia into the water, and these nutrients give microcystis an additional boost.”
Fortunately, poisoning from the toxin can’t be spread from person (or animal) to person. No human deaths from ingestion of microcystins have been reported; but dogs, wildlife and livestock have died following exposure.
The Iowa Department of Public Health notes that the toxin can affect people in various ways:
Symptoms can present in as little as a few hours or days, but generally the symptoms take around a week to show up. The only treatment is addressing the symptoms.
Here’s what to do if you think you may have been exposed by swimming in, swallowing, or breathing in water where a blue-green algae bloom exists:
Source: Mother Nature Network