In a Nutshell: Since the 1974 implementation of the Clean Water Act the number of waterborne ailments has declined, but the portion of  these attributable to distribution system contamination has increased. Legionella serves as a prime example of  the fact that nature is always evolving and creating microbial hazards. Water treatment to control microorganisms should  be given top priority over ” . . .hypothetical risks of trace chemical contaminants that get a lot of publicity and lead people to spend money on bottled water because they think it is safer.”

Rehabilitation prevents leaks and breaks where inoculation and accumulation occur

Traditionally, most microbial waterborne diseases in the United States are gastrointestinal and short-term, self-resolving infections. They can include bacterial pathogens, enterovirus, rotavirus, norovirus and hepatitis A virus, or protozoa like Cryptosporidium and giardia. 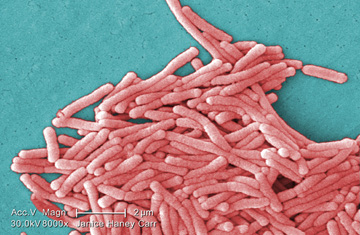 Although detecting waterborne disease outbreaks is difficult, and numbers are underestimates, reported waterborne disease outbreaks in the United States have declined since implementation of the 1974 Safe Drinking Water Act. The range is from a high of 90 reported outbreaks in 1979-1982 to fewer than 10 in 2002, out of about 60,000 community water systems. In addition, surveillance for outbreaks is today better than in the past, and identification of the causative microbial pathogens has significantly improved.

The reduced outbreak incidence is probably attributable to EPA requirements for microbial quality monitoring and increased water treatment that involves filtration and disinfection of surface water and disinfection of groundwaters. However, while the number of waterborne outbreaks has declined, the portion attributable to distribution system contamination has increased.

In the public eye

Beginning in 2001 Legionaires disease was added to the surveillance and reporting system, and incidences of water-related legionellosis are being reported with some regularity worldwide. Legionellosis is a consequence of inhalation of aerosols contaminated with Legionella pneumophila and perhaps other related species.
Legionaires disease gets its name from a 1976 outbreak among attendees at an American Legion convention in Philadelphia staying at a particular hotel. There were 221 reported cases and 34 deaths from pneumonia. It required about six months of intense microbiological and chemical investigations to identify the causal bacterial agent because there was no known culturing technique available for the then unknown strain of bacteria.

The origin of exposure was blow-down inhaled aerosols from an air-conditioning system. The cases indicated that smokers were at greater risk than non-smokers. Speculation as to origin was rampant, and it even included a supposed “theory” involving a relatively exotic chemical that might have been pyrolyzed while smoking cigarettes. I recall hearing a report from a U.S. Senate committee that undertook its own assessment and announced that supposed chemical cause, shortly before the true microbial agent was identified. Apparently politics and science don’t mix very well.

Retrospective investigations revealed that in fact numerous “legionnaires” cases had occurred previously and had not been identified, and that a milder form of respiratory infection called Pontiac fever was not uncommon. Many outbreaks and deaths have been reported since then, especially in hospitals. The U.S. Centers for Disease Control has estimated up to 18,000 legionellosis deaths in the U.S. each year.

Since 1976 it has been determined that Legionella pneumophila are fairly common soil and water bacteria and pathogenic when inhaled, not from ingestion. They grow under low nutrient warm water conditions at temperatures in the range of 25 C to 50 C. So, they can be present in warm to hot water systems, showerheads, humidifiers, misting and cooling water for air conditioning systems and hot tubs. In distribution systems and plumbing they can colonize biofilms where they may be protected from normal disinfectant residuals.

The at-risk populations are predominantly those who are elderly and also persons with impaired immune systems. Hospital environments have been the source of numerous cases of outbreaks and deaths related to Legionella. However, it is apparent that there are high-risk people in the general population; for them even a typical house or building environment could be a risk, and specific diagnoses and determinations of causal origin will be less likely.

There are water system management techniques for reducing patient risks used by many hospitals. They include monitoring their plumbing systems, additional disinfection and periodic shock disinfection or heating. Chlorine, chlorine dioxide and even peroxides and silver and copper are being used, but with some controversy for the latter two. There are several studies that indicate that systems with chloramine residuals have a much lower risk of a Legionella related outbreak than those with free chlorine residuals. The rationale is that although chloramines are less potent than free chlorine, their lower chemical reactivity allows them to more effectively penetrate biofilms that may harbor the Legionella.

Other recommendations include maintaining hot water systems above 50 C to reduce growth of the microorganisms, but the dilemma is that temperatures in the 55 C to 60 C range introduce a scalding risk, especially for children and seniors.

The law of unanticipated consequences is still functioning. The benefits of modern warm controlled housing environments, air conditioning and indoor hot water plumbing can have downside consequences. Even those beneficial societal technological advances can provide an opportunity for otherwise innocuous microbes to proliferate and cause disease and death.

The moral of the story is that nature is always evolving, and there are perverse unidentified microbes out there that can harm us. Water treatment to control many microorganisms, not just E. coli, is essential, and waterborne microbial disease is still, and always will be, the greatest risk from public drinking water supplies. Aging water distribution systems require aggressive rehabilitation to prevent leaks and breaks where inoculation by microorganisms and accumulation in biofilms can occur. Replacing that aging infrastructure is a much greater national priority than the hypothetical risks of trace chemical contaminants that get a lot of publicity and lead people to spend money on bottled water because they think it is safer.