Massive Tunneling Machine Will Be Used to Prevent Sewage Spills

In a Nutshell:  Big water problems sometimes require big solutions. When it rains, the nation’s capitol’s ancient sewage system quickly chokes, and rainwater/sewage spills into waterways and basements. A machine of “gee-whiz enormity” is digging a massive tunnel to contain the excess. Imagine a machine 26 feet in diameter and longer than a football field.
It will eventually stretch longer than a football field and, when finished, will have burrowed through four miles of clay beneath the Potomac and Anacostia rivers, leaving behind a tunnel so big it could hold two tractor-trailers stacked on top of each other.The enormous tunnel-boring machine, nicknamed “Lady Bird,” made its debut Tuesday at the Blue Plains Advanced Wastewater Treatment Plant, where DC Water officials heralded it as part of a plan to significantly reduce the amount of raw sewage that flows into local rivers and basements during rainstorms. 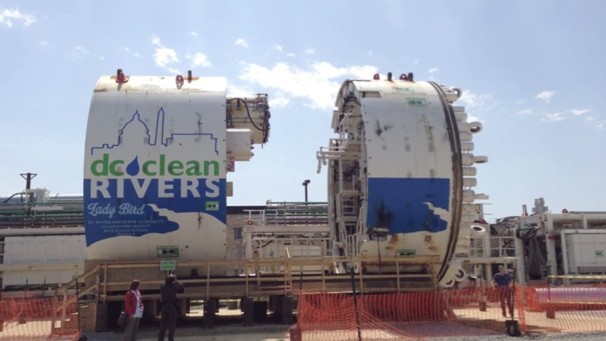 Enormous tunnel-boring machine called Lady Bird. It will eventually be longer than a football field.

The four-mile tunnel will start beneath the Potomac at the treatment plant just north of the Woodrow Wilson Bridge and then dig beneath the Anacostia, ending near Nationals Park. It will become part of a 12.8-mile tunnel, scheduled for completion in 2022, that will serve as an enormous holding tank during rainstorms. The rain-sewage mixture that now overwhelms older sewer pipes and overflows into waterways and basements will instead be held in the big tunnel. Once the storm subsides, the rain-sewage mixture will flow downhill to the treatment plant.“We’ll capture all of it,” said George S. Hawkins, DC Water’s general manager. “This is the most significant improvement in water quality in the Anacostia, Potomac and Rock Creek in a generation.”DC Water officials say it will be the largest tunneling effort in the District since the Metrorail system was built. The work is part of DC Water’s $2.6 billion “Clean Rivers Project” to cut sewer overflows by about 96 percent by 2025.The problem stems from the fact that, as in some other older cities, one-third of the District’s sewer pipes also carry rainwater runoff. (In the rest of the city, stormwater is carried away in pipes separate from the sewer system.)

The District must reduce the sewer overflows as part of a 2005 consent decree related to a federal environmental lawsuit. The rain-sewage mixture also contains animal feces, oil, pesticides and other pollutants that run off lawns and roads, DC Water officials said. 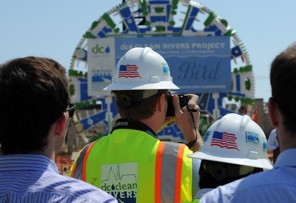 A photographer caught this attention-grabbing picture of the backs of people’s heads at the Lady Bird dedication ceremony.

The first four-mile section is scheduled to operate in 2018. DC Water officials said the entire 12.8-mile tunnel will extend from the treatment plant to Sixth and R streets NW. They said it will provide permanent relief for neighborhoods such as Bloomingdale and LeDroit Park, where raw sewage has flooded into basements for decades.

The gee-whiz enormity of the project wasn’t lost on the dignitaries and hard-hatted utility crews who attended the tunnel-boring machine’s unveiling.

Standing in front of the circular “cutter head” spanning 26 feet in diameter, Mayor Vincent C. Gray told the crowd: “When you’re talking about a piece of equipment that’s longer than a football field, it’s just hard to fathom something of that magnitude. . . . It’s just an unbelievable engineering feat.”

The tunnel-boring machine was named after Lady Bird Johnson as a tribute to her environmental activism. But the machine also has a notably modern flair. It can be followed on Twitter: @LadyBirdTBM.