Lolong, The World’s Largest Saltwater Crocodile in Captivity, Dies in the Philippines

In its September 2011 issue, the Pure Water Occasional reported the spectacular capture of Lolong, the world’s largest saltwater crocodile in captivity, near a small southern town in the Philippines. 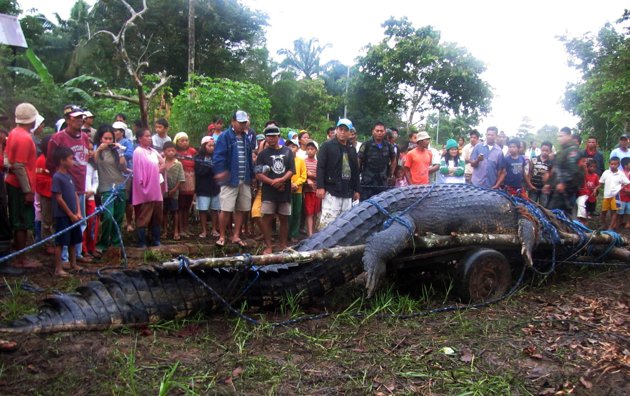 Lolong, When Captured in September 2011

Now we must report that Lolong has died of unknown causes.

Although the giant crocodile was hunted and captured as a safety measure after he had been blamed for the deaths of several villagers, after his capture he become a local celebrity and a formidable tourist attraction that brought fame and dollars to the town of Bunawan.

Bunawan  plans to preserve the remains of the 1-ton crocodile in a museum to keep tourists coming and stop the community from slipping back into obscurity,

Lolong was declared dead after he was  found floating on his back with a bloated stomach in a pond in an ecotourism park which had begun to draw tourists.  The fame of the immense reptile was spreading rapidly, and the town was planning a new road to accommodate tourists.

The cause of death is unknown, and an autopsy will be performed by wildlife experts.

Lolong was estimated to be over 50 years old.  He measured 20 feet 3 inches in length and was proclaimed the world’s largest saltwater crocodile in captivity by Guinness World Records.

According to Yahoo News:

Even though Lolong was blamed for the deaths of several villagers over the years, Bunawan villagers grew to love the giant reptile because it came to symbolize the rich biodiversity of the marsh where it was captured. The vast complex of swamp forests, shallow lakes, lily-covered ponds and wetlands is home to many animals, including threatened species such as the Philippine hawk eagle.

Various religious groups offered prayers Monday and spiritual leaders also planned to perform a tribal funeral rite, which involves butchering chickens and pigs to thank forest spirits for the fame and other blessings the crocodile has brought, Elordie said.

The rite is to be held at the ecotourism park, where the reptile was a star attraction, drawing foreign tourists, scientists and wildlife journalists to Bunawan, a town of 37,000 people about 515 miles (830 kilometers) southeast of Manila.