Lead Pipes in the United States: A Situation That’s Out of Control

Lead Pipes That Tainted Newark’s Water Are Found Across US

A drinking water crisis in New Jersey is bringing new attention to an old problem: Millions of homes across the U.S. get their water through lead pipes.

by David Porter and Mike Catalini

Pure Water Gazette Editor’s Note: This AP article is the best we’ve seen on the massive lead pipe problem that American water systems are facing. We’ve added a couple of pictures. We ask you to read this article carefully. It is sobering.

NEWARK, N.J. (AP) — A drinking water crisis in New Jersey’s biggest city is bringing new attention to an old problem: Millions of homes across the U.S. get their water through pipes made of toxic lead, which can leach out and poison children if the water isn’t treated with the right mix of chemicals.

Replacing those lead pipes is a daunting task for cities and public water systems because of the expense involved — and the difficulty of even finding out where all those pipes are. Only a handful of states have put together an inventory of the buried pipes, which connect homes to water mains and are often on private property. 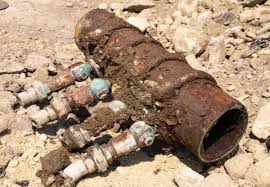 Do you feel good about drinking water that came to your home through this pipe?

But after drinking water emergencies in Washington, D.C.; Flint, Michigan; and now Newark, some experts are calling again for a rethinking of the theory that treating the pipes with anti-corrosive agents is enough to keep the public out of danger. Instead, the lead lines should be replaced, they say.

“It’s hard to come up with an argument against it,” Manny Teodoro, a public policy researcher at Texas A&M, told New Jersey lawmakers this week. “Look, lead service line replacement is expensive, but it’s also removing poison from the bodies of ourselves and our children. It’s difficult to think of many things that are more important.”

Done correctly, chemical treatment should be enough to keep water in line with federal regulations, according to Peg Gallos, executive director of the Association of Environmental Authorities, a group representing water utilities. But in cases where the chemicals fail, pipe replacement becomes an option, she said.

People in about 15,000 households in Newark were told to drink only bottled water last month after the Environmental Protection Agency warned that the city’s efforts to control lead contamination weren’t working. Since then, residents in the largely poor, mostly black and Hispanic city have had to line up in summer heat for cases of free water distributed by government agencies.

The crisis has unfolded over several years, with city officials insisting until recently that everything was under control.

Numerous city schools switched to bottled water because of lead contamination in 2016. Tests in 2017 found that 1 in 10 Newark homes had nearly twice as much lead in their water as allowed by the federal government. The state Department of Environmental Protection issued a warning to the city and public health advocacy groups complained, but Mayor Ras Baraka defended the safety of the city’s water by sending residents a brochure condemning what he said were “outrageously false” claims about lead contamination.

Later, consultants concluded that the city’s corrosion control treatment for one of its main water supplies wasn’t working. New chemicals were introduced this spring, but it will be months before their effectiveness can be accurately gauged. The city handed out filters beginning last fall, but then the EPA warned that they might not working.

Newark’s water crisis shares some similarities to the ones in Flint and Washington, D.C.

Flint’s lead levels spiked in 2014 after the city switched its water source from Lake Huron, which was being treated with the anti-corrosive orthophosphate, to the Flint River, which was not treated. Washington’s high levels between 2000 and 2003 resulted from the city’s switching anti-corrosion chemicals from chlorine to chloramine. 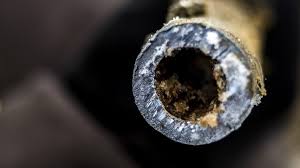 Experts estimate there could be as many as 10 million lead service lines nationwide but only five states require inventories or maps of their locations, according to the Association of State Drinking Water Administrators. A handful of other states have set up voluntary reporting.

That leaves dozens of states with incomplete knowledge of where and how much of the toxic plumbing they have.

“The biggest problem we face is we don’t know where these lead pipes are,” said Marc Edwards, an environmental engineering professor at Virginia Tech University. “In Flint, ultimately we had to dig up every single yard to find out what pipe was there because the records were so bad.”

Newark is now racing to try and replace all of its roughly 18,000 lead service lines, with the help of a county-backed, $120 million loan.

While cost is a factor — in Newark, it will cost about $10,000 per home to replace the pipes — so is the diffuse nature of water utilities. Teodoro estimated there are about 50,000 water systems in the U.S., many of them small systems. And in many cases the location of pipes isn’t even written down, Mary-Anna Holden, a commissioner on New Jersey’s Board of Public Utilities, told lawmakers recently.

“I asked the superintendent ‘Where’s the map of the system?’ He’s pointing to his head. Like his grandfather and great-grandfather had started the water system so he knew where every valve was,” Holden said.

The most common source of lead in water comes from pipes, faucets and fixtures, rather than from water sources, according to the Environmental Protection Agency. Congress banned the use of lead in water pipes in 1986, citing lead’s harmful effects on children’s nervous systems. In 1991, federal regulators began requiring water systems to monitor lead levels in drinking water and established a limit of 15 parts per billion.

Since the Flint water crisis, some states have gone farther. Michigan last year lowered its threshold to 12 parts per billion. Experts say no amount of lead is safe for children.

Kim Gaddy, 55, works as an environmental justice advocate for Clean Water Action. She’s a renter in Newark and had her lead service lines replaced by the city shortly before the two positive lead tests led to the city handing out bottled water.

She says she thinks it’s time for state and federal officials to require replacing lead service lines, no matter what the cost might be.

“My message would be let’s protect the health of (residents) and provide them with safe, affordable drinking water from the taps,” Gaddy said.