The Southern Nevada Water Authority expects growth to outpace current water supplies by 2037. Investing in seawater desalination is one option the agency is considering to meet demand in the desert metropolis. 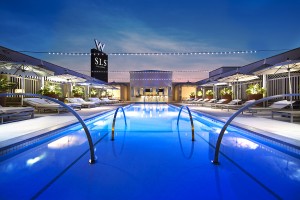 Sin City has never been a place that thinks small. So it should come as no surprise that Las Vegas – about 300 miles from the Pacific Ocean – is pondering seawater desalination to meet its long-term water demand.

That doesn’t mean Vegas plans to build a pipeline to the ocean. More likely, it would help pay for a desalination facility in a place like Mexico, then trade that investment for a piece of Mexico’s water rights in the Colorado River.

This prospect is described in the Southern Nevada Water Authority’s 2017 Water Resource Plan, a strategy to satisfy water demand in the Las Vegas Valley over the next 50 years. It was largely overlooked, however, amid clamor over more controversial and imminent water development schemes like its groundwater development project – a plan to tap ancient aquifers from a half dozen rural valleys hundreds of miles away in northern Nevada.

Yet desalination is very much part of the plan to keep up with growth in Vegas.

Bronson Mack, a spokesman for the water authority, said there are advantages for Las Vegas in such a deal because the metro area is only about six miles (as the crow flies) from the Colorado River. The water authority already relies on water intakes at Lake Mead, the largest reservoir in the U.S., and recently completed a new lower-elevation intake to access water as the level of the lake declines.

“Certainly desalination might be part of Southern Nevada’s water portfolio at some point in the future,” Mack said. “Timing will depend on what our demands look like and what water supplies look like going forward. But, certainly, it could be something that happens within the next 20 or 30 years.”

A similar approach to desalination is being considered in Arizona. It’s possible the two states could form a partnership to invest in desalination, but Mack said no formal talks are under way now.

Although Las Vegas is known as a city of excess, that is no longer the case when it comes to water consumption. The city has become a leader in water conservation. Since 2002, when the current long-term drought began in the Southwest, Vegas has added more than 600,000 residents while actually reducing its withdrawals from the Colorado River.

This has been done through aggressive conservation programs, like phasing out turfgrass in urban landscapes. The region also recycles 40 percent of its municipal wastewater, returning it to Lake Mead where it can be withdrawn as needed without impacting its allotment of Colorado River water.

But population growth continues, and the time will come when Las Vegas needs new water supplies. Researchers at the University of Nevada, Las Vegas estimate the region’s population, now about 2.2 million, will expand by 500,000 people over the next 20 years. That’s like adding two more Renos – Nevada’s second-largest city – to the sprawling Las Vegas Valley.

Rick Spilsbury, a longtime critic of the water authority, supports desalination to accommodate growth in Vegas.

Spilsbury is a member of the Ely Shoshone Tribe and a board member of the Great Basin Water Network, a group working to kill the water authority’s plan to tap Northern Nevada groundwater. One of those taps would extract groundwater from Spring Valley, a site in White Pine County near Great Basin National Park, which the Shoshone consider sacred.

On his blog, Spilsbury began urging the water authority to consider desalination in 2013.

“I think it makes so much more sense to make more water than to use up the water you have,” he said. “If you desalinate water, you’re making more water and there will be more water available. Whereas if you take water out of the ground, you’re going to have less water in the long run.”

He wants the water authority to make desalination its first option to meet future demand, not exploiting finite groundwater in distant valleys.

“The thing I’m really concerned about is what comes first,” he said. “Ideally, I’d like to see the state save some water for the future. I want them to make water before they take water.”

Las Vegas may not need new water supplies for a while. Southern Nevada is entitled to 300,000 acre-feet per year of Colorado River water, the smallest allotment among the states that depend on the lower river. Yet it currently uses only 240,000 acre-feet. When possible, it banks the unused portion in local groundwater aquifers. It currently has enough banked water to meet its annual need for eight years, Mack said.

But if population growth projections are accurate, the region will need new water resources as soon as 2037.

“With additional conservation, we could see the need for new water resources being pushed out even further into the future,” Mack said.

Spilsbury suspects the district underestimates its water demand. Growth has hovered around 2 percent annually since the end of the recession. But the university’s projections show growth tapering off to less than a half percent annually by 2037 – which it admits may be too low.

Chris Clarke, California desert program manager at the National Parks Conservation Association, worries about the environmental effects of a new airport in that area. “An airport is obviously going to promote opportunistic development on every available piece of land between the state line and Vegas,” Clarke said. “To a certain extent, water will be a limiting factor. But Vegas is also really good at finding ways to get water when they decide they need it.”

In addition, the Southern Nevada Water Authority’s board of directors last year approved guidelines to deliver water outside the Las Vegas Valley. This could include growth in the Ivanpah Valley along Interstate 15 between Las Vegas and the California state line.

This article originally appeared on Water Deeply. You can find the original here. For important news about water issues and the American West, you can sign up to the Water email list.