Lake Cities Struggle to Save Their Harbors as Water Levels Fall 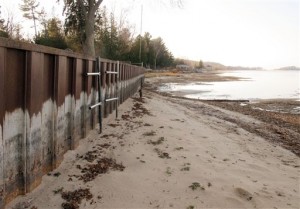 In this Nov. 16, 2012 photo, the white streaks on a steel break wall show the normal water level on Portage Lake at Onekama, MI, which is connected by a channel to Lake Michigan. Levels across much of the Great Lakes are abnormally low, causing problems for small harbor towns that rely on boating and water tourism. The Great Lakes are dropping because of drought and climbing temperatures, a trend that accelerated with this year’s almost snowless winter and scorching summer.

The Great Lakes, the world’s biggest freshwater system, are shrinking because of drought and rising temperatures, a trend that accelerated with this year’s almost snowless winter and scorching summer. Water levels have fallen to near-record lows on Lakes Michigan and Huron, while Erie, Ontario and Superior are below their historical averages. The decline is causing heavy economic losses, with cargo freighters forced to lighten their loads, marinas too shallow for pleasure boats and weeds sprouting on exposed bottomlands, chasing away swimmers and sunbathers.

Lake Michigan’s level at the end of October, 2012 was more than 2 feet below its long-term average. The Corps of Engineers says that  without heavy snowfall this winter, the lake may decline to its lowest point since record-keeping began in 1918.

Funding for dredging channels to enhance navigation, which at one time would have come from Congress, is now not available.  Some towns have been able to raise local money for such projects, but they cannot afford to do this on a regular basis.

Tourism, of course, has fallen precipitously, and tourism is essential for many of the small towns in the region.

In bygone days, friendly members of Congress would slip money into the federal budget to dredge a harbor. But so-called earmarks have fallen out of favor, leaving business and civic leaders wondering where to turn. A desperate few are raising money locally for dredging but insist they can’t afford it on a regular basis.

Tourism has sustained Onekama since the early 1900s, when northwestern Michigan coastal towns became popular with wealthy visitors from Chicago, Milwaukee and Detroit. On a typical summer day, the community’s marinas are crowded with yachts, speedboats and fishing charters.

Through the entire region falling water levels are taking a toll, illustrating how extensively the health of the Great Lakes affects the economy of a region that is home to more than 30 million people extending from Minnesota to New York.

More Information from the Herald Standard