Kissimmee: Straightened and then Recurved

The Kissimmee: A River Recurved 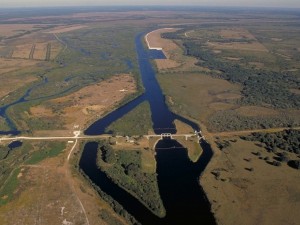 Kissimmee Straightened by the Army Corps of Engineers

It sounds almost superhuman to try straighten a river and then recarve the curves.

That’s what federal and state officials did to the Kissimmee River in central Florida. They straightened the river in the 1960s into a canal to drain swampland and make way for the state’s explosive growth. It worked — and it created an ecological disaster. So officials decided to restore the river’s slow-flowing, meandering path.

That billion-dollar restoration — the world’s largest — is a few years from completion. And so far, it’s bringing signs of new life, especially on a man-made canal that was dug through the heart of the river.

“Birds are back, both wading birds and ducks. They’re all over the place,” says Paul Gray of Audubon Florida. “The oxygen levels in the river are better. There’s a lot more game fish in the river like bass and bluegill and stuff. Most of the biological perimeters, the goals of the restoration we’ve already met.”

The man-made canal begins near Walt Disney World in Central Florida and flows 50 miles south. “It messed up our water management infrastructure,” Gray says. “Now we drain so much water that when it’s dry we don’t have enough water for our human needs. We over drained, and so now we’re trying to rebuild the system where we’re going to catch water instead of wasting it when it’s wet.”

For decades, piles of dirt dug for the canal have remained heaped on its banks. Now bulldozers are pushing the dirt back into the waterway, filling it and making way for the river’s old meanders to recarve their historic path. Five dams controlling the waterway’s flow are being blown up, allowing the water to flow naturally.

The 20-year restoration effort is expected to be complete by 2017.

The Kissimmee also is the backbone of the Everglades. It supports farming and the drinking water for 6 million south Floridians. The problem is now central Floridians are looking to the Kissimmee.

“Groundwater is not an infinite resource,” says Joanne Chamberlain of the Central Florida Water Initiative, a group of state agencies, cities and utilities who together are examining how much water the region needs.

The group estimates by 2035 Central Florida’s demand will exceed its supply, which it gets mostly from an underground aquifer. So the group’s members are considering other sources. One possibility they’ve identified is the Kissimmee’s headwaters.

“There’s opportunities under certain situations that water can be used — high-water level situations where that water could be taken, stored and used for other purposes,” Chamberlain says.

She means during the summer wet season, when Florida receives the bulk of its rain.

“Florida is not like any other state in the union. We revolve around our water so greatly, not just as a drinking source but as a source of recreation and as source of tourism,” says Chuck O’Neal, chairman of the natural resources committee of the League of Women Voters of Florida.

The group supports a state constitutional amendment on the ballot in November that would put more money toward land and water conservation, including the Kissimmee.

Other environmentalists hope to protect the Kissimmee’s water with a unique legal tool called a water reservation, which would set aside a certain amount of water so utilities can’t have it for consumer use.

“The future is going to be trying to defend the water, to make sure the river has the proper hydrology,” Gray says.

Cynthia Barnett, a Florida author who writes about water issues. “The key for the future is to learn from those past mistakes and now do things differently. Instead of clashing all the time the idea is to work together to use less.”

She says the Kissimmee is a lesson, that Floridians don’t need more water but that environmentalists, utilities and farmers together can work toward a future of conservation. 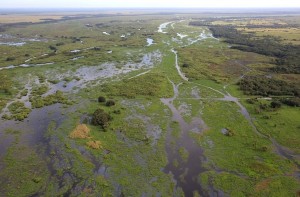 The restoration’s goal is to put as much of the Kissimmee as possible back to the way it was. This photo shows the river after restoration.