In the Pure Water Gazette’s article on seed patenting, My Secret Life as a Farmer by Gene Franks,   which appeared in our paper version in the spring of 1995,  John Withee was praised as one of the great heroes of our time because of his tireless efforts to save heirloom varieties of beans from extinction.  We were gratified to see that the Seed Savers Exchange, the oldest and most prestigious of the seed preservation societies,  has featured Withee and recognized his accomplishments in its 1999 Seeds of Change catalog. Much of the information in our article below comes from their article on Withee.

Seed patenting remains one of the most serious issues of our time, though few seem aware of the gravity of the war that multinational seed corporations are waging on heirloom seed varieties. John Withee recognized the seriousness of the seed dilemma early on and devoted his considerable energies to the preservation of heirloom varieties of beans.

Withee, who lived in Lynnfield, Massachusetts,  has been called “the world’s greatest bean collector.” He was born in Portland, Maine in 1910, son of a grocer who fed his family beans every day of the winter. John’s favorite bean from his youth was the Jacob’s Cattle, and it was his effort to locate that bean that got him started as a collector.  He is credited with the collection of about 1,200 separate strains of beans from the 1960s to the the 1980s.

He is best know for the founding of the very significant bean collectors society known as Wanigan Associates. Wanigan is an Indian name for boat-mounted  kitchens carried on river rafts that were floated down Maine’s rivers during the spring lumber drives. Huge quantities of beans were served to the Maine woodsmen from the floating cook shacks. 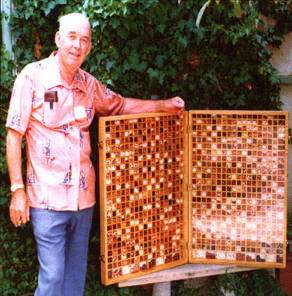