Is Water A Fundamental Human Right?

Water rights of Ireland and Jordan 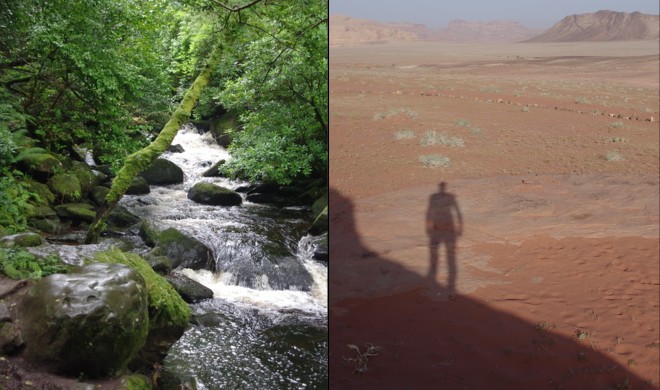 Here is a cautionary tale of two very different countries which once shared a similar water use philosophy and usage patterns. The right photo is in Jordan’s Wadi-Rum desert. The forest on the left is in Ireland.

Parts of this country receive up to 4 meters of rain each year. But Ireland was running out of water so its government recently brought in water charges. Here is why.

Ireland receives an average of 1000mm of annual rainfall and parts of its Atlantic coastline receive nearly 4000mm (4 meters) of rain each year. Ireland’s driest recorded year was 1887 when only 356.6 mm of rain fell, more than twice Jordan’s average rainfall. With such a plentiful source of freshwater, Ireland never had to pay for huge reservoirs, desalinization plants, waste-water reclamation systems or Red to Dead sea projects.

In fact, in 1997, the government of Ireland decided that water should be a basic human right. So domestic water charges were abolished. Ireland did this thirteen years before the United Nations General Assembly passed resolution 64/292 in July 2010 which also “Recognizes the right to safe and clean drinking water and sanitation as a human right that is essential for the full enjoyment of life and all human rights.”

Water, they argued, shouldn’t be a commodity. Water should be a human right.

Irish residents took full advantage of this basic right. They washed their cars, dishes, clothes, bathed, showered and drank the free water. They could even water their golf courses and gardens during rainstorms and let their faucets drip 24 hours per day, 365 days per year– all for free because there was no such thing as a water meter!

Hundreds of thousands of new homes were built without any consideration for water efficiency. Flush a toilet in a brand new million dollar Dublin home and seven liters of freshwater will begin a journey to the sea. Water was free so one noticed or cared when leaks in pipes developed. It is estimated that 41% of Ireland public utility water leaked away from underground pipes before arriving into Irish homes.

The average Irish citizen consumed 140 cubic meters of water per year. This is between two and three times the average for the rest of Europe and slightly less than a Jordanian’s average water consumption of 170 cubic meters per year.

It wasn’t long before the rainy country of Ireland began to experience water shortages. Ireland’s just-in-time rainwater delivery system couldn’t cope as the demand from growth and leaks and wastage grew towards infinity.

An Irish government report published in 2012 concluded that “Our current model of water provision, where unlimited quantities of an expensive product are provided at no charge, is simply not sustainable,” as economist Milton Friedman once said, “If you put the Federal Government in charge of the Sahara Desert, in five years there will be a shortage of sand.”

It took slightly longer than 5 years but in 2014, only 17 years after the Irish government abolished water charges, the water charges came back. This time the government wasn’t shy about putting a price tag on this valuable and limited resource. As yet another Atlantic storm drops torrents of Gulf Stream humidity onto this Emerald Isle, the Irish water charges are estimated to start at €1.70 per cubic meter.

Meanwhile in Jordan, water costs €1.92 per cubic meter but subsidies reduce this so that only about €0.51 of this is passed on to the water user. So unless you’re willing to soap up outside in the rain, a shower in Cork Ireland (1207mm rain/year) will cost more than three times as much as a shower in Amman Jordan. (271mm rain/year). Put another way, a faucet that leaks one drop per second would cost about 15€ each year in Ireland and only 4€ in Jordan.

But what would happen if Jordan ran out of water or if the government could no longer guarantee the purity of Jordan’s water supply? People might buy bottled water. At about €0.50 per liter, bottled water costs €500 per cubic meter. This is 260 times the cost of Jordan’s municipal water. Sometimes governments must charge for a limited resource in order to reflect the true social cost of that resource. This is certainly true of water. After all, water is a basic human right.