Is Tap Water That’s Treated and Sold In A Bottle A Ripoff?

Many Brands of Bottled Water Are Nothing More than Filtered City Tap Water.  So What?

An article in the current Harold Sun of Sydney makes some fairly common complaints about bottled water.

The reader is warned in a headline:
TAKE a closer look at your bottle of “pure” water: it’s probably sourced from the tap. Millions of unsuspecting customers are buying filtered tap water and boiled rainwater at massive mark-ups of more than 180,000 per cent.

While the Pure Water Gazette has been a consistent critic of bottled water because of the environmental costs of draining aquifers, energy intensive transportation, and the creation of mountains of throw-away bottles, we feel that accusing bottlers of overcharging for an inferior product is unfair.

As long as the source of the water is clearly and honestly placed on the label, there is absolutely nothing wrong with purifying and reselling Waxahatchie TX tap water.  Fraud is one thing, but if the bottler is processing his water as described on the label (by carbon filtration, ozonation, reverse osmosis, for example), he is actually delivering a superior product regardless of its source. 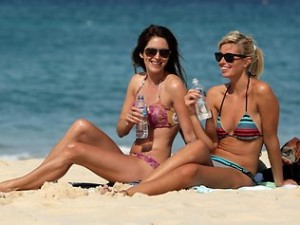 These ladies bought bottled water largely for the convenience. Having the water in a bottle is wonderful. Have you ever tried taking water to the beach in your cupped hand?

Waxahatchie water that has been through a reverse osmosis system is better water–with disinfectants, fluoride, heavy metals and extraneous chemicals (if any) removed–than the water that comes from the tap.

Also, the seller isn’t just selling water.  He’s selling  convenience.  The consumer is actually paying the 180,000 percent markup to a large degree for the convenience of having the water in a bottle.  That’s no small thing.  A bottle, when you think about it, though the cost is low, is a marvelous convenience, one of the true wonders of the world.  Plastic bottles are an environmental disaster, but they are also wonderful from user’s perspective.

All water is recycled water.  There is nothing magic about “spring water” that makes it inherently superior to well-processed tap water.

If criticism is in order, it probably should go to consumers who buy the water, not to the businesses who sell it.

Bottled water is simply another example of the throw-away world we have created.  It’s fairly simple to resuse bottles and fill them with water from a home water purifier, thus reducing the markup by thousands of percentage points and making the environmental impact only a fraction larger than drinking straight tap water.  Anyone can do this.  Buying an expensive product when you could have something as good or better at a fraction of the cost doesn’t make the seller a crook, as the Harold Sun and other bottled water critics have implied, but it certainly does say something about the consumer.