Wastewater Reuse: A field study shows that carrots and sweet potatoes accumulate an anticonvulsant drug and a drug metabolite at potentially unsafe concentrations 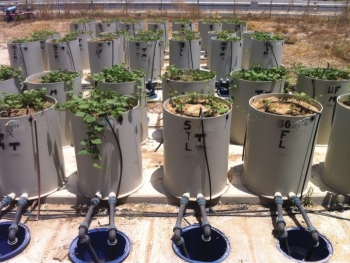 In an experimental plot, scientists in Israel irrigated sweet potatoes with treated wastewater to determine if the vegetables accumulated pharmaceuticals from the water.

Faced with dwindling sources of freshwater across the globe, growing numbers of farmers are using wastewater to irrigate food crops. This wastewater, however, can contain trace amounts of pharmaceutical compounds excreted by people, so scientists want to know how much of the drugs make it into plants and onto dinner plates. A new study of root vegetables irrigated with treated sewage effluent finds that, although many drugs don’t accumulate at detectable levels, a couple can build up to concentrations that may exceed safe exposure levels (Environ. Sci. Technol. 2014, DOI: 10.1021/es5017894).

About half of Israel’s agriculture relies on irrigation with treated wastewater, and the practice is gaining ground in Africa, Asia, Mexico, and in parts of the U.S., including California and Arizona, says Tomer Malchi, a soil scientist at Hebrew University of Jerusalem. But only a few previous studies have gauged plant uptake of pharmaceuticals in a farm setting, he says, and these did not estimate the health risks to people nor look at drug metabolites.

Malchi and his colleagues, including Benny Chefetz, decided to track 14 common pharmaceuticals and two metabolites of one drug in irrigation water and then in the edible parts of crops. The scientists grew sweet potatoes and carrots outdoors in 0.5-m3 plots irrigated with the same water used by local farmers: treated wastewater from the city of Kiryat Gat, Israel. They measured concentrations of the compounds in the irrigation water, soil, and plant tissue using liquid chromatography/mass spectrometry. In the two vegetables, the scientists did not detect any drugs except for caffeine and the epilepsy drugs lamotrigine and carbamazepine. These nonionic organic molecules cross cell membranes easily and thus are more likely to be taken up by plant roots. They also found 10,11-epoxycarbamazepine, a metabolite of carbamazepine. Concentrations of the compounds ranged from 0.013 to 4.130 ng per g of the vegetables’ fresh weight.

Malchi and his colleagues then determined the threshold of toxicological concern (TTC) for the compounds, a method that the European Food Safety Authority uses to establish safe levels in food of chemicals that lack firm toxicological data. The method assigns compounds to one of four levels of potential toxicity, each of which establishes an acceptable daily consumption value, above which there would be a possible risk to human health.

On the basis of the concentrations detected in the vegetables, “an adult would have to consume hundreds of kilograms of sweet potatoes or carrots from our study daily to reach the TTC level for caffeine or carbamazepine,” Malchi says. For 10,11-epoxycarbamazepine, a child would need to eat 90 g/day of sweet potato leaves, a popular food in Asia and Africa, to exceed the TTC level. But that same child could surpass the TTC level for lamotrigine by eating just half a carrot in a day.

Malchi says the data suggest the need for toxicological studies of these detected pharmaceuticals “to determine their exact level of toxicity, so that acceptable levels in treated wastewater for irrigation can be established.”

The study is likely the first time that the TTC has been used to assess health risks from pharmaceuticals in food crops, saysChad A. Kinney, an analytical chemist at Colorado State University, Pueblo. He thinks it’s a good approach for screening substances for further study. The study also suggests the need to look at metabolites—not just parent compounds—when determining the risks of using treated wastewater in agriculture, Kinney says.