In Lima, rainfall is scarce and water is scarce, but the atmospheric humidity is around 98%.  A billboard has been created that pulls 25 gallons of water per day out of the atmosphere. 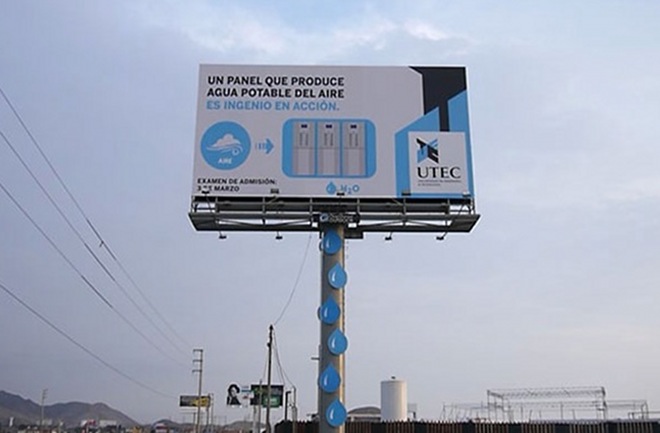 The Gazette earlier reported on “fog harvesting” in Lima.  Here’s a high tech application of the same principle. The piece below is reprinted from news.discovery.com–Editor.

We all know the adage of turning lemons into lemonade. But have you heard the one about the billboard that turned polluted desert air into drinkable water?

Lima, Peru, is the second biggest capital in the world located in a desert. Raindrops are few and far between. The city gets less than an inch a year, forcing many residents to get their water from less than desirable places, such as dirty wells.

However, Lima’s humidity is around 98 percent, so the University of Engineering and Technology (UTEC) teamed up with ad agency Mayo Publicidad to create a billboard that harvests moisture in the air and converts it into purified water that locals can tap at the base of the billboard.

The air goes through a series of five machines inside the billboard, including an air filter, a condenser and a carbon filter, and finally collects in a pipe leading to the foot of the structure. The billboard is expected to generate upwards of 25 galllons (96 liters) of water per day for the neighboring community.

Dust off your Spanish and check out UTEC’s video about the project here.