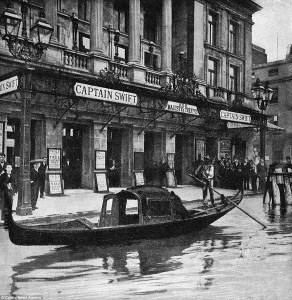 From the waterways of Piccadilly Circus to moorings outside St Paul’s Cathedral, these remarkable illustrations imagine what London would look like if its streets were to become the canals of Venice.

The superimposed images, created by hand for a spoof feature in The Harmsworth Magazine in 1899, show the city’s roads filled with former taxi drivers navigating gondolas through bustling water traffic, rather than Victorian horse and carts.

The historic photo project was prompted by news reports at the turn of the 19th century which described how London had lowered by 68 feet in 500 years, sparking speculation that the metropolis would eventually sink below the River Thames.

These pictures were accompanied by an imagined future tour of London’s newly-submerged landmarks. 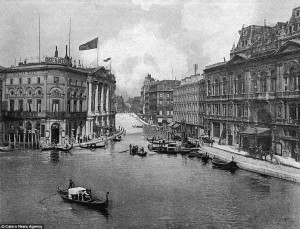 Piccadilly Circus in a sunken London.

Source: The Daily Mail.  Go here for more pictures from the 1899 collection.