I Support the War But Not Our Troops

Editor’s Note: Tiger Tom’s “I support the war but not our troops” originally  appeared in the early days of the most recent U.S. invasion of Iraq,  during the reign of Bush the Younger.

I Support the War But Not Our Troops

Our Slogans and Our Battlefields Aren’t So Hot, Either

— “My country, right or wrong” is like saying “My mother, drunk or sober.”–G.K.Chesterton.

Like all red-blooded Americans,  I’m crazy about this nifty war in Iraq.  It is truly something to be proud of.  Us, with the most expensive military machine ever assembled,  kicking the ragged ass of a downtrodden third world country,.  What could be sweeter?  That’s what America is about.

We can be proud that we have not allowed the lessons of history to spoil our noble primitive nature. Like our beastly ancestors,  we know that when some problem comes up,  there’s nothing as effective and as satisfying as good old brute force. By not learning a whit from the  grief caused by the 36,452,765 wars of the past, we’ve disproved the theory of evolution.  We’re as dumb as we were in the Garden of Eden, and we still believe whatever the snake tells us.

This is a pretty good war, but frankly our troops don’t meet the test.  I have seen many soldiers on TV, and  I, Tiger Tom, say that what this war needs is better troops.  Most of these guys are pretty plain and, frankly,  don’t seem a lot smarter than the Commander in Chief, although, like the great civilian soldiers at the Department of “Defense”(1),  when the camera is rolling they can spit out a few modern soldier cliches like “survivability”  and “shape the battlefield.”

They do not have good haircuts. It is hard to support troops with bad haircuts.

Do You Support Our Troops?

I read a Z-Net quiz that asked people questions about the war and how to support our troops. Here is the first item of the questionnaire.  See if you can answer it.

1. The anti-war movement supports our troops by urging that they be brought home immediately so they neither kill nor get killed in a unjust war. How has the Bush administration shown its support for our troops?

a. The Republican-controlled House Budget Committee voted to cut $25 billion in veterans benefits over the next 10 years.

b. The Bush administration proposed cutting $172 million from impact aid programs which provide school funding for children of military personnel.

d. All of the above.

a. I knit mittens for our troops.

c. I do not drive my car, thus saving gasoline for the use of our troops.

d. I spend countless hours watching our troops on television.

e. I write letters to my congressperson demanding that my taxes be raised to take care of our veterans.

f. I volunteer 20 hours per week at a Veteran’s Hospital cleaning the bed sores of quadriplegic veterans of past wars.

g. I bought a paper poppy from a veteran in front of the Post Office in 1993.

h. I get drunk frequently at dances at the local VFW chapter.

i.  I go around saying, “I support our troops.”

When I gave this test to a group of patriotic Americans,  selecting only true patriots (those who had big, gaudy flags on their vehicles),  here were the results:

In addition to better troops, we need a better battlefield.  Whoever thought up having a big, expensive, televised war in Iraq was a moron. It’s like playing the Super Bowl game in Fairbanks, Alaska.   I, Tiger Tom, say that when it’s time for Operation Iranian Freedom and Operation North Korean Freedom, we must not let them host the war in their dumb countries. It’s our war.  We should get to choose the battleground. Iran will just be a rerun of Iraq. Sand, wind, and desolation. Boring.   And North Korea is way too cold, plus it’s about as 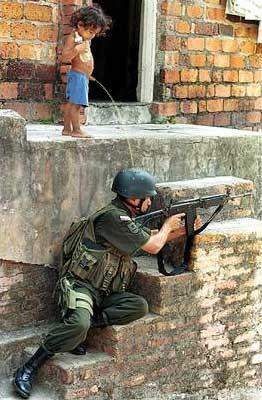 “This boy is being unhelpful.” — Donald Rumsfeld.

scenic and appetizing to a TV audience as a rotten turnip.

I say, let’s move both wars to a really nice place to fight. A place like Hawaii.  It will make for better TV, and our troops and journalists will enjoy it so much more.

Support our troops.  Demand that the next war be fought on a nice island in the South Pacific. Or in Florida.  In and around the governor’s mansion.  That would be good.

Another thing our next wars need is better slogans.  I mean, the guy who writes this “Iraqi Freedom,” “Valiant Shield,” and “They hate us for our freedom”  crap should be cast down from the highest pinnacle of Saddam’s palace (if Saddam still has an unbombed pinnacled-palace left).  I, Tiger Tom, suggest some better war slogans. The obvious one has two good variations.  Either “Operation Ignorant Arrogance” or “Operation Arrogant Ignorance” seem equally powerful. Here are some others:

“Operation Pepsi Peace”  (This one would be used only if Pepsi agrees to cough up several billion for the reconstruction of whatever country we plan on demolishing.   This very sound idea for war financing is based on the reality that Pepsi has a lot more money than the combined wealth of the bottom 90% of the countries that make up the Coalition of the Bribed and
Intimidated–our “allies”–and it makes more sense to sell advertising rights in order to finance the war than to bleed Cameroon dry to rebuild buildings in Iraq.  The schools prostitute themselves to the corporations, so why can’t the military?  We give Pepsi an exclusive on, let’s say, all soft drink machines in Iraq (with an option for machines in Iran)  for a 10-year period in exchange for a few $ billion to rebuild the country. And while we’re on this train of thought, selling advertising on the sides of tanks isn’t all that shabby an idea.)

“Operation Fight Fair”  [This one, made relevant by the dirty fighting in the Iraqi war, is designed to remind the enemy that only WE get to have big

powerful weapons.  Fighting with unorthodox methods and un-approved weapons (like sharpened sticks) is not fair and will not stand. Enemy troops are required to wear U.S.-approved uniforms and stand in open areas away from civilians where we can easily bomb them “cleanly and fairly.”]

In conclusion, I, Tiger Tom,  say that this war thing needs better planning. War is our main export. We need to get serious about it.  It needs professional management. I say, dump Donald Rumsfeld.  “Rummy” is clearly an arrogant and ineffective old fart.  We need someone dynamic who can give our wars the epic sweep that will command weeks and weeks of top prime time ratings.  The man for the job, I say, is Charlton Heston.  He has epic movie experience aplenty,  and even the most weepy-eyed of the bed-wetting liberals would not object to soldiers having guns. Everyone would be happy.

Another Editor’s Note:  Rummy, of course, did get dumped, but unfortunately Charlton Heston has gone on to the great rifle range in the sky and is not available.

1. As with most things that regard war, this is a commonly inverted term. When they say Defense they really mean Offense.