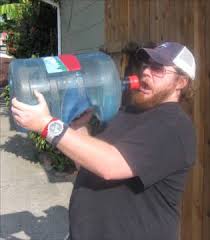 Drinking too much water left a woman with a urinary tract infection seriously ill, and doctors said water intoxication can kill you. The case in point is a 59-year-old London woman who, in an attempt to “flush out her system,” drank water so copiously that she developed hyponatremia, also called water intoxication.

According to the Mayo Clinic:

Hyponatremia is a condition that occurs when the level of sodium in your blood is abnormally low. Sodium is an electrolyte, and it helps regulate the amount of water that’s in and around your cells.

In hyponatremia, one or more factors — ranging from an underlying medical condition to drinking too much water during endurance sports — causes the sodium in your body to become diluted. When this happens, your body’s water levels rise, and your cells begin to swell. This swelling can cause many health problems, from mild to life-threatening.

Hyponatremia is marked by an abnormally low level of sodium in the blood. Sodium helps regulate the quantity of water in and around cells.

There is a death rate of nearly 30 percent for patients whose sodium level drops drastically below normal. The condition can involve vomiting and significant speech difficulties.

The treatment may require medication, but usually it can be corrected simply by restricting water intake. Recovery may take a week or longer.

“The old adage to ‘drink plenty of water’ should be approached with caution if you are not vomiting, or experiencing diarrhea, or excessive sweating,” advised one doctor. “Your thirst is often the best guide to gauge when you think you need to drink more water if you have no history of kidney disease.”

Other signs of water intoxication include headaches, nausea and vomiting, confusion, loss of energy and fatigue. The illness can cause the brain to swell, coma, seizures and death.

People with normal kidney function who sometimes develop water intoxication are endurance athletes who drink more water while exercising than their kidneys can excrete.

Although doctors commonly advise patients with many ailments to “drink plenty of fluids,”  little evidence supports the recommendation. There are definitely both risks and benefits to increased fluid intake.

Reference: Tucson News was the original source, but the article itself is no longer available.