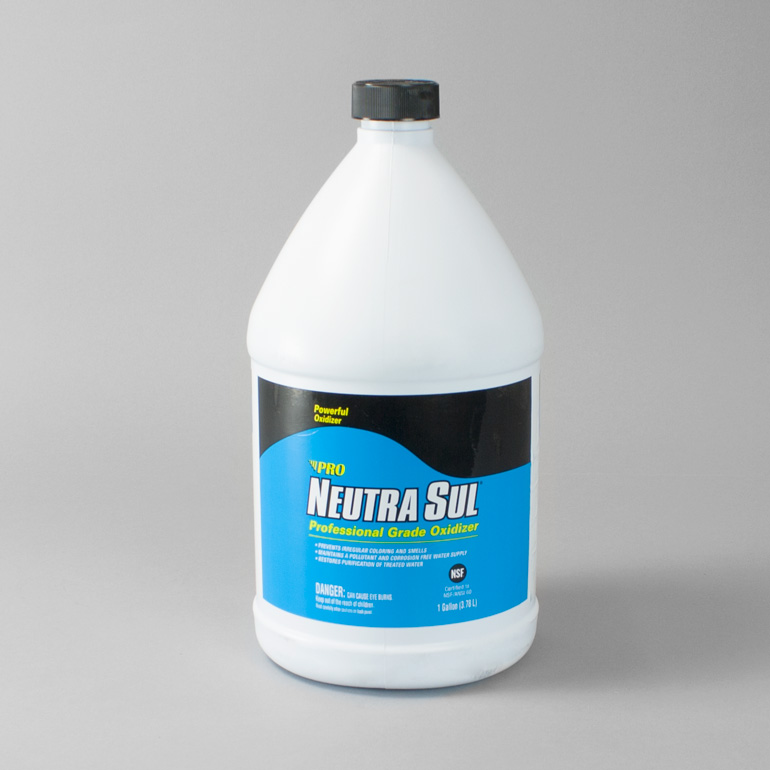 Hydrogen peroxide (H2O2) is one of the most powerful oxidizers available for water treatment. Although it can be used to control bacteria, it’s main use is as pretreatment for filters removing iron and hydrogen sulfide.

Seven percent hydrogen peroxide (70,000 ppm) is the standard water treatment strength.  At this strength liquid hydrogen peroxide can be transported through normal shipping methods and is not considered hazardous.

Thirty-five percent hydrogen peroxide (350,000 parts per million) is sometimes used. It is a hazardous material and must be handled with great care. It usually requires dilution with distilled water for residential use. For this reason, for most home applications 7% hydrogen peroxide is the product of choice.

A Filter Is Required

Like air, ozone, and chlorine, hydrogen peroxide prepares contaminants to be removed by a filter.  The oxidizing agent is only half of the treatment. The filter that follows is necessary to remove the precipitated contaminants. Carbon is in most cases the filter medium of choice after hydrogen peroxide treatment.  Manganese dioxide media like Birm, Katalox and Pyrolox  can be destroyed by hydrogen peroxide.   Carbon, both standard and catalytic, works well for both hydrogen sulfide and iron removal.  Carbon also breaks down the residual peroxide, so there is usually no peroxide left in the service water. Mixed media filters, zeolite filters, and redox filters (KDF)  have also been used successfully.

Hydrogen peroxide is exceptionally stable, having around a 1% per year decomposition rate.  Heat and sunlight can increase the rate of decomposition.  Dilution of the peroxide should be done only with the best water possible. Distilled water is preferred.  H2O2 reacts with impurities in the water and loses strength in the process.

If using 35% peroxide, the 35-percent solution should be diluted to 7%. To do this, add 5 parts distilled, reverse osmosis, or deionized water to 1 part 35% hydrogen peroxide. Seven percent hydrogen peroxide is usually fed without dilution although it can be diluted if the injection system will not feed it in small enough quantities.

H2S2 can be used to treat up to 10 ppm iron.
There is virtually no limit for hydrogen sulfide. It is not uncommon to oxidize up to 70 ppm hydrogen sulfide with peroxide.

Dosage: Simple But Not So Simple

Figuring the dosage needed for your application could not be simpler.

Just joking about the “could not be simpler” part. Actually, dosage calculations are impossible and only work in college chemistry classes. In the real world, there will always be parts of the equation that you don’t know. However, working the formula helps you make an educated guess so you will know which size pump to buy and it will give you a starting place. Understand that in the end, there will always need to be some trial and error, some adjustment to your settings, then more trial and error. The information and calculator on this page may help, but don’t expect the calculator to give you a pat answer.

Other Considerations in Sizing and Setup

Warm water also causes oxygen to dissipate more quickly, so a higher dosage may be necessary as water temperatures increase.

Dosage is determined by the same formula as with other oxidants: gpm x 1,440  x dosage/ % concentration of  H2O2= chemical feed rate needed.

Never mix H2O2 with alkaline chemicals such as soda ash, limestone, or ammonia. This will cause the rapid decomposition of the hydrogen peroxide and might even result in a violent reaction.

If an alkaline chemical like soda ash is need to raise pH, feed hydrogen peroxide with one pump and soda ash with a separate pump.

As stated, a holding tank is usually not needed with hydrogen peroxide.  Inject the peroxide with a peristaltic pump. (Conventional pumps can be used, but they often require modification.)  If 7% peroxide is fed undiluted, a very low delivery rate pump (< 3 gpd, for example) is usually best in theory, but since hydrogen peroxide dosage needs don’t always follow theory, a higher dosage rate pump often works best.  If no holding tank is used, a static mixer at the injection point is recommended.  Injection is always before the well’s pressure tank. The filter, of course, follows the pressure tank.  A softener, if used, must be downstream of the filter. Injecting hydrogen peroxide directly in front of the softener with no filter is not a good idea.