In a Nutshell: The “fluoride” that’s put in city water supplies, called hydrofluorosilicic acid, or HFSA,  is not the same thing as the pharmaceutical-grade fluoride that is used by dentists.  Among other contaminants in additive-grade fluoride is arsenic.  In fact, ninety percent of the arsenic found in city tap water comes from HFSA.

Editor’s Note:  The bulk of this article is taken directly from Fluoridealert.org,  but I’ve added a bit from an excellent study of hydrofluorosilicic acid from Waterloowatch.com.  Although the origins of the “fluoride” that is used in municipal water treatment are not secret, the American public is woefully naive on the issue and most people do not realized that the substance they are trusting to to save their children’s teeth is actually a toxic by-product of the fertilizer industry.–Hardly Waite.

Industrial-grade fluoride chemicals added to US public water supplies contain arsenic that the EPA classifies as a human carcinogen. Switching to low-arsenic pharmaceutical-grade fluoride will save society $1 billion to $14 billion annually, according to research published in Environmental Science & Policy, led by former EPA senior scientists who are experts in chemical risk assessment, reports the Fluoride Action Network (FAN).

Almost all hydrofluorosilicic acid used in North America originates in the State of Florida, where phosphate containing rock is strip-mined.  (See picture.) 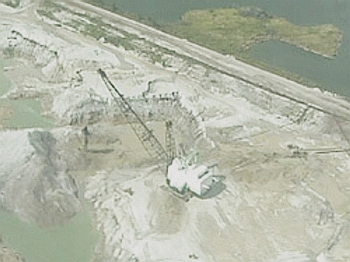 Hydrofluorosilicic acid is drawn from open air cooling lakes, as is. It is containerized in tankers, and shipped to your municipal drinking water supply. Hydrofluorosilicic acid remains contaminated with trace amounts of lead, arsenic, mercury and radioactive materials. It is delivered unrefined, and in none-pharmaceutical grade, to be used as water fluoridation ‘product’.

The Safe Drinking Water Act requires EPA to determine the level of certain contaminants in drinking water at which no adverse health effects are likely to occur.  These health goals, based solely on possible health risks and exposure over a lifetime with an adequate margin of safety, are called maximum contaminant level goals (MCLG).  The MCLG for arsenic is zero.  The EPA also sets an enforceable maximum contaminant level (MCL), but concedes this level will not prevent cancers.

Senior researchers, Drs. William Hirzy and Robert Carton , write, “Arsenic levels in this HFSA product vary substantially but are typically about 30-35 mg/kg.”  These levels would qualify it as toxic hazardous waste if not for a legal loophole because it is sold to fluoridate water.  The study found HFSA raised the arsenic level of finished or tap water by anywhere from 0.078 to 0.43 parts per billion (ppb).

Ninety percent of arsenic showing up in tap water comes from fluoridation chemicals, according to a study in the American Water Works Association publication, Opflow, led by Dr. Cheng-nan Weng.

Using EPA’s calculation methods, HFSA would cause from 320 to 1800 arsenic-induced cancers per year.  They calculated these cancers would cost society $1 billion to $6 billion per year.*

The researchers conclude: “Our analysis shows that, if local governments that currently add HFSA to their drinking water wish to continue delivering fluoride to their citizens and at the same time reduce the number of lung and bladder cancers among their citizens, they could do so with a significant net benefit to society by switching to USP NaF [pharmaceutical grade Sodium Fluoride] for fluoridation.”