How Much Water Evaporates from Lakes?

In A Nutshell: Water evaporates from lakes and rivers, but most of us don’t realize how much surface water evaporates or what factors influence the amount.  The piece below, adapted from a Lawton, OK newspaper, answers some of these questions.

Not all the water disappearing from Lawton area lakes is reappearing as streams pouring out of water faucets. 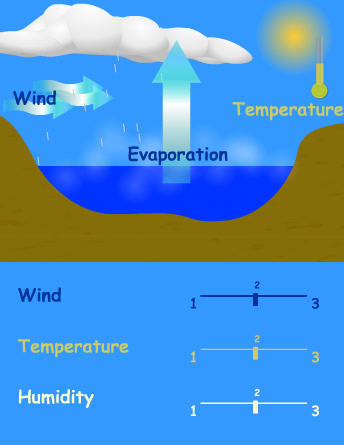 Summer in Oklahoma means sun and wind, two of the components in an equation that could cost two area lakes 100 million gallons of water a day through evaporation. That’s five times the average amount of water the city treats daily to serve Lawton, Fort Sill and its other water customers, and three times its peak daily water treatment, according to information from the City of Lawton.

Lawton officials have said their two closest sources of raw water  Lake Lawtonka, which feeds the Medicine Park Water Treatment Plant, and Lake Ellsworth  lose an average of 25 million gallons of water a day (mgd) and 50 mgd, respectively, in the summer to evaporation. The potential rates are even higher at Waurika Lake (Lawton’s third and largest source of raw water) and Lake Lugert-Altus. Waurika Lake can lose an average of 100 mgd to 120 mgd in the hot summer months, while Lugert-Altus’ potential loss is 49.2 mgd to 98.4 mgd.

Calculating or even explaining evaporation rates is complicated, because of the variety of factors that influence it.

Dave Taylor, manager of the Waurika Lake Master Conservancy District, said the Corps of Engineers, which controls Waurika Lake, looks at four variables, starting with relative humidity. The lower, the humidity, the easier it is for water to evaporate.

“Higher humidity is good,” Taylor said, admitting the high humidity rates blanketing the area may be miserable for humans, but they are good for lakes. “In most the research I’ve done, the relative humidity is the key.”

Temperature also has an effect, as does the amount of radiant heat from the sun. Another variable is wind speed: The more wind that travels across a lake, the more water it picks up. Taylor said to think of this as the cooling effect of water on your skin when a breeze blows across it.

“That water is evaporation,” he said.
Tom Buchanan, general manager of the Lugert-Altus Irrigation District, agreed wind is a factor, but said evaporation also is based on how high the water level is and how big the surface pool is: The larger the pool, the more exposed the water within is to environmental factors.

“A lake at its highest capacity is the most prone to evaporation,” Buchanan said, noting that has become less of an issue at Lugert-Altus, which is at an historically low elevation because of severe drought.

Buchanan said the evaporation rate varies, even on the same lake, due to weather conditions. But he can make some general statements.

“I really think the average evaporation rate in western Oklahoma is about 60 inches. It varies. We can lose water to evaporation every day of the year, but it escalates when those factors are highest,” he said..