There is a pervasive misconception about food prices in the United States because of the way we keep our books. We like to congratulate ourselves for having “cheap” food by world standards and to attribute this low cost to our efficient and highly productive food provision system. This is because most people are not aware that the price we pay for food at the market is only a tiny part of the real, complete price.. The real cost involves hidden dollars as well as non-monetary costs of far greater importance. Viewed in its totality, we pay more for food than any nation on earth.

For example, there are massive taxpayer-funded subsidies for transportation systems, including super highways, bridges, harbors, and airports that allow long-distance shipping of large quantities of food items. This makes food appear artificially cheap. People do not consider that without super highways local growers would not be able to compete with multinational corporate farmers. These subsidized transportation systems greatly benefit large corporate food producers and actually work to the disadvantage of small local food producers by flooding their market area with cheap food brought in from great distances. What we pay for roads is part of the cost of food.

Publicly financed global communications systems also greatly aid large corporate food producers at the expense of small growers, and they, too, must be considered as part of the cost of food. One estimate is that U. S. corporations benefit from subsidies and externalized costs to the tune of $2.4 trillion per year. This corporate welfare comes out of our pockets.

Another potent subsidy item is university research, which is rarely if ever aimed at helping small farmers or local markets. Instead, it focuses on high-dollar technologies that benefit corporate agribusiness and do great harm to smaller producers and usually to the environment. For example, The Ecologist reports the case of a mechanical tomato picker that was developed at considerable public expense at the University of California. It greatly reduced labor costs for large tomato farmers, but its purchase price was so high that smaller growers could not afford to use it in their fields. “This one technology,” says The Ecologist, “helped to consolidate California’s 4,000 tomato farms into just 600 in about a decade.” Taxpayers paid a little less for tomatoes at the market, but they also got to pay for some very expensive research. The 600 surviving companies got fatter and richer, but 3,400 smaller tomato farmers, not to mention innumerable laborers who were replaced by the picking machines, would be hard pressed to see the benefits of this publicly financed research..”

And then there are the direct subsidies we taxpayers give to “farmers.” When they talk about farm subsidies on the Ten O’ Clock News, people envision the Brown family keeping their little vegetable farm going with the help of an Agriculture Dept. check. Actually, in both the U.S. and the United Kingdom, a full 80% of the government’s financial help goes to the richest and largest 20% of the “farmers.” The needy farmers being fed at the public trough, of course, are multinational agribusiness conglomerates who use part of their subsidy checks to gobble up the family farms of the Browns and their neighbors who did not qualify for subsidies. Add the cost of farm subsidies into your food budget.

Perhaps the most intangible of the costs of agribusiness food, however, is the  “health tax.” How do you estimate the cost to your health of consuming nutrient-depleted foods, drinking pesticide contaminated water, and breathing polluted air? Perhaps the greatest cost of all is hidden in the impact of corporate agriculture on the environment and the health of citizens. Air pollution, greenhouse gasses, soaring cancer rates, fossil fuel and water depletion–these are all hard items to assign costs to. But pay for them we do, each time we purchase a factory-raised chicken or a loaf of phony bread at the supermarket

The Pure Water Gazette urges its readers to support local growers and to resist the agribusiness effort to globalize food production and destroy small food producers. Buy locally and organically whenever you can. The slightly higher price you pay the local grower is a bargain. 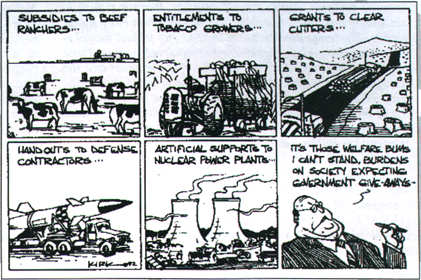