“In rivers, the water that you touch is the last of what has passed and the first of that which comes; so with present time.” –Leonard da Vinci. 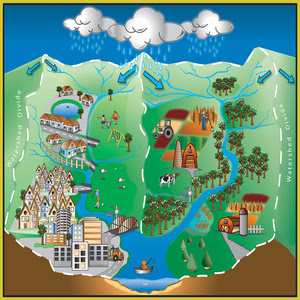 Leonard da Vinci’s comparison of blood flowing through human arteries to the movement of water upon the Earth demonstrates his understanding of watersheds. In fact, da Vinci, along with Nicollo Machiavelli, used this knowledge of river systems to attempt a diversion of the River Arno from Pisa to Florence in the early 1500s as a military strategy. But that is another story for another time.

Da Vinci recognized that water flowed over and under the surface of the Earth in a connected, veinous pattern akin to the human anatomy. Water flows across and under an area of land to enter rivers, streams, and other water bodies to arrive at a common point. This is the description of a watershed.

Watersheds come in different shapes and sizes due to topography, geology, climate, and amount of development. For example, the Continental Divide in the United States determines which direction water will flow toward its most outward point. On the west side of the Rocky Mountains, the Colorado River flows toward the Pacific Ocean. On the eastern side, surface water flows toward the Gulf of Mexico and Atlantic Ocean. Similar to da Vinci’s connection of the human body to water flows, our own understanding of watersheds tells us much about local water sources and quality.

Another way to think of a watershed is as a big bowl separated from other watersheds by ridges or elevation directing water runoff in a certain direction. Our water supply is located in one or more of those watershed bowls. The quality of the water we receive from either wells or utility companies is determined by the runoff of water within our watershed.

There are 78 major watersheds in the lower 48 states of the US of which the Mississippi drainage basin is the largest. It is also the third largest in the world after the Amazon in South America and the Congo in Africa. On a local scale, however, there are many smaller watersheds contained within the major ones.

Why do we care about watersheds?

Everything that occurs in a watershed can affect a stream, lake, or river. This can help individuals be aware of drinking water issues and treatment options. A watershed located in an area where livestock production is prominant may have a higher concentration of nitrates in the local water supply. Additionally, watersheds containing large urban areas can experience more flooding or runoff pollutants than rural areas.