How Air Conditioners Increase the Flow of the Colorado River

Tides, Energy, and the Colorado River

In a Nutshell: John Muir, founder of the Sierra Club, said that if you tug on one thing in nature you find it attached to the rest of the world.  With that in mind, it makes perfect sense that when a man in an apartment in Phoenix, AZ turns on his air conditioner,   flow in the Colorado River increases.  This will make sense after you read Elizabeth Cutright’s article.

In a lyrical piece written for The Nation, author William deBuys (A Great Aridness: Climate Change and the Future of the American Southwest) describes his time spent rafting down the Colorado River. As he details the changing landscape and the effects climate change and demand management (or mismanagement) have on this interstate tributary, deBuys also manages to address one of the most pressing issues facing water resource management today: the water-energy nexus.

The Colorado is “a tidal river” explains deBuys, going on to note, “these days, the tides of the Colorado are not lunar but Phoenician.” As demand rises from Phoenix, AZ, water levels dip and ebb in response.

“On this April night, when the air conditioners in America’s least sustainable city merely hum, Glen Canyon Dam, immediately upstream from the canyon, will run about 6,500 cubic feet of water through its turbines every second,” writes deBuys. He goes on to illustrate the interdependent relationship between the city’s energy needs and its water resources: 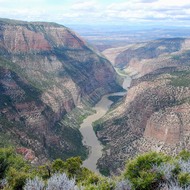 “Tomorrow, as the sun begins its daily broiling of Phoenix, Scottsdale, Mesa, Tempe, and the rest of central Arizona, the engineers at Glen Canyon will crank the dam’s maw wider until it sucks down 11,000 cubic feet per second (cfs). That boost in flow will enable its hydroelectric generators to deliver ‘peaking power’ to several million air conditioners and cooling plants in Phoenix’s Valley of the Sun. And the flow of the river will therefore nearly double.”

Of course, as the heat intensifies in that urban oasis, Phoenix residents will crank up the AC with little thought to effects those watts will have on the Southwest’s water resources.

For deBuys, the connections are clear and significant.

“By mid-summer, temperatures in Phoenix will routinely soar above 110 degrees Fahrenheit, and power demands will rise to monstrous heights, day and night. The dam will respond: 10,000 cfs will gush through the generators by the light of the moon, 18,000 while an implacable sun rules the sky. Such are the cycles—driven by heat, comfort, and human necessity—of the river at the bottom of the continent’s grandest canyon.”

Despite the drastic and significant effects of the energy and water needs of some of the region’s largest cities, few laymen ever make the connection.

“The subsequent story of the West can indeed be read as an unending duel between society’s thirst and the dryness of the land, but in downtown Phoenix, Las Vegas, or Los Angeles, you’d hardly know it,” writes deBuys.

In truth, the impact of this use (who some would undoubtedly label misuse or perhaps even abuse) of the Colorado has tendrils that stretch far and wide beyond green lawns in a desert-scape, or nonstop air conditioning during the hottest part of the day. As deBuys details, harnessing the power of one of “the West’s great waterways,” results in:

* Water for 40 million people
* Irrigation for 5.5 million acres of farmland
* The gradual (and perhaps irreparable) erosion of natural beaches and sandbars as a result of the hydroelectric tides
* Changing water temperatures—resulting from dam releases—aid nonnative species (like trout) to the detriment of indigenous populations of fish—some on the verge of extinction (and many protected under the Endangered Species Act).

The entire article is worth reading, as deBuys goes over the finer points of water rights, court decrees, and the eternal rain dance between supply, demand, and conservation.

One question deBuys asks at the beginning of his essay stuck with me to the end, “The crucial question for Phoenix, for the Colorado, and for the greater part of the American West is this: How long will the water hold out?”